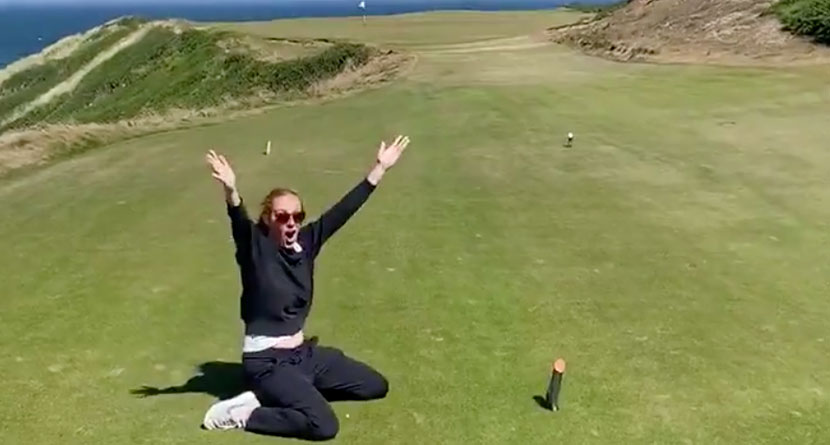 The stories that accompany an ace are rarely as interesting as the feat itself, but both the backstory of the one made by Allison Koehnke, a 36-year-old from Salem, Ore. over the weekend at Bandon Dunes Resort is worth reading on and seeing the video itself.

Koehnke isn’t a novice golfer, but she wouldn’t be considered an avid player either. She plays six holes per week with some girlfriends as an excuse to get out, and that  was all the experience Koehnke needed to know a few things: she’s a solid player, but she doesn’t really feel too comfortable with her 100-yard shots.

That’s where her local caddie, Graham Banks, came into play. Shepherding Koehnke’s group around the Sheep Ranch, Bandon Dunes’ most recent addition to its four other full-length courses and designed by Bill Coore and Ben Crenshaw, Banks had an idea when the group came to the 102-yard par-3 16th hole, according to an interview with GolfDigest.com.

With Koehnke’s husband, Drew, manning a cell phone camera, Allison stepped up to the tee with her trusty putter, aimed down the tightly-mown walking path and let loose what she and Banks had dubbed a “chutt” or a chip-putt.

Tracked down this woman who made an ace with her PUTTER at Bandon Dunes’ Sheep Ranch, as first shared by ⁦@NoLayingUp⁩. She’s got quite the story to tell! That her husband got it on video is priceless. pic.twitter.com/3TSsbb8MAS

The swing was short and powerful and it took off on a great line. As it reached the green, Koehnke’s ball caromed off another ball on the putting surface and dropped into the cup for an ace.

The ace on the Sheep Ranch’s 16th hole was the sixth since the course opened two and a half months ago, but it was Koehnke’s first and the first accomplished with a putter.

Ace with her putter ⁦@BandonDunesGolf⁩ Sheep Ranch and the deservedly joyous walk to the sweet ball retrieval from cup. pic.twitter.com/jrOBLM3kT9

Another positive to come out of the experience beyond Internet viral celebrity: golf has another avid player among its ranks.

“We’ve already talked about it. Before we get home we have to pick another place to go play,” Koehnke said. “It can be anywhere. When I get home, I’m going to want to play more than six holes a week.”