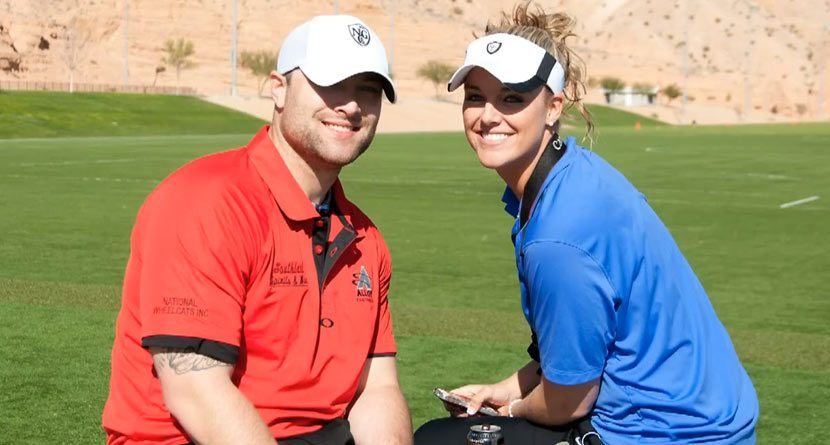 From a young age, the Brentz twins, Bryce and Jared, were destined to be athletes, though their stories and paths were very different. Their story is one which has been known locally around their hometown of Knoxville, Tenn., for years, but with both of them settling into their careers at 25, their story is getting more and more popular.

Bryce Brentz was born completely healthy. He was a star athlete throughout high school and college and is now fighting for a spot on the Boston Red Sox roster for the 2014 season.

Jared was born with arthrogryposis and club feet. Doctors told him it was because his feet got stuck under his mother’s rib cage but Jared said in a story published on knoxnews.com last July, the real reason was because, “Bryce took up all the room [in the womb].” At the age of 12, Jared chose to have both of his feet amputated, despite his parent’s apprehension. Jared also said he knew he’d be fine when the doctors told him, “We can give you the tools to live the life you want to go live. You just have to be the one to go and do it.”

Since then, nothing has stopped Jared from being the athlete his brother Bryce knew he could be.

Jared couldn’t play football, but he was a golfer and wrestler at South-Doyle High School, where he and his brother we both star athletes. Since graduating in 2007, there hadn’t been much competition for Jared. Besides being a popular call for local scramble golf tournaments due to his prodigious length off the tee, he was relegated to hitting balls at the driving range. Even doing that got to be troublesome, but not for the reasons one might expect for a double-foot amputee. As Jared recounted in his interview with knoxnews.com, “I really have to go out of my way to find a driving range where I’m not hitting into traffic or fairways somewhere. Luckily for me, there’s a golf course, Nashboro Village, that actually let me come out there late in the evening and tee off from the first tee.”

Recently, he found the perfect outlet for his competitive nature and raw power. While his brother Bryce is one of the top-prospects in the Red Sox farm system, Jared is a rising star in a branch of golf that is getting more and more popular, and more and more important, every day.

ParaLong Drive competition is growing rapidly, being used as a tool in rehab while helping amputees and wounded warriors return to a sense of normalcy. The first National Amputee Long Drive Competition was held last year and wouldn’t you know it, Jared won — both the overall and multiple amputee division titles, with a monster 367-yard bomb.

@AdamsGolfInc #367 yards later with the Speedline LS Diver = division / national champ!! Thanks for your support!! pic.twitter.com/gs844ougs8

Jared’s success has led to equipment sponsors. This year, Jared will be teaming up with Krank golf, the unquestionable “authority in distance hitting.”

Bryce continues to be motivated by his younger brother (by eight minutes) and his tenacity. He said in an interview with the Boston Globe, ““It would motivate anybody. My brother would give anything to have two normal feet. How can I get upset about striking out? For him to be that strong and such a good athlete, that drives me. He inspires me.”

The ParaLong Drive competition is growing in popularity and, with golf making its return to the Olympics in the 2016 games in Rio, there is a movement to bring the ParaLong Drive to the the Paralympics. The next Amputee Long Drive Championship will take place May 8-9 in Mesquite, Nev.

Other Hot Links:
– Could Balls of Steel Improve Your Golf Game?
– PGA’s New Task Force Created to Grow the Game
– Golf World Reacts to NFL Free Agency Frenzy
– You Have To Be Crazy & Rich to Golf in Afghanistan
– Tiger Woods’ Intimidation Factor: Real or Imagined?