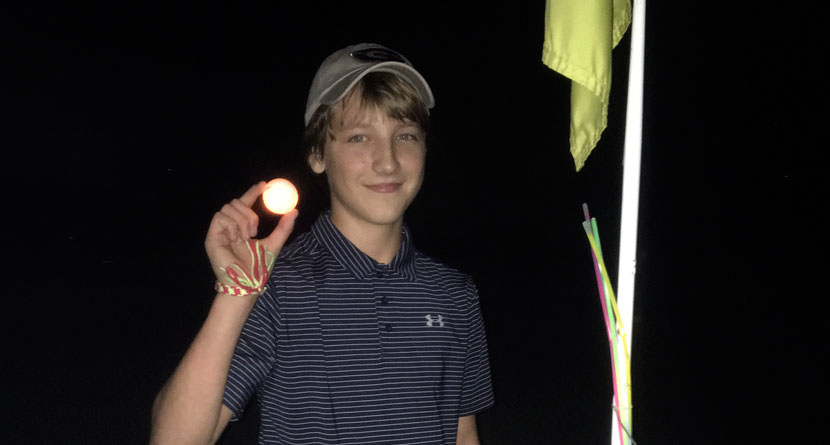 Many golfers go their entire lives without feeling the euphoria of an ace. The odds of holing out from a tee box are well-documented — 12,500-to-1 for amateur golfers — but what about when playing at night? And what about doing it in consecutive years?

“Twice a year, we have a night golf event in the pitch black on our par-3 course,” Moore said. “(We have) about 30 players at each event. We use night flyer golf balls that glow, light up the flagstick and cup and put glow sticks around the greens and tee boxes. But, as the pictures of the teams I always take show, it is still pitch black outside.”

Last April, Wright, then 13, made his first night ace.

“(Wright) made it on the team’s final hole, No. 8, from about 110 yards,” Moore said. “Adding to the excitement of this hole-in-one was that the sprinklers had started going off, so everyone was playing in a hurry to try and finish. And his shot gave his team a one-stroke victory!”

As if holing out once in the middle of the night weren’t enough, last month Wright, now 14, went ahead and doubled up.

According to the National Hole-in-One Registry, only 14% of golfers go on to make a second ace. As you would probably imagine, the odds for multiple aces made at night aren’t available, but it’s safe to say they are exceedingly rare.

That is, of course, unless you’re Jack Wright.

“Competing on October 20 (of this year), Jack hit another hole-in-one on No. 6 from about 100 yards,” Moore said. “This shot again led his team to victory by a single stroke!”

Not only is Jack the envy of golfers all over the world who haven’t hit a hole-in-one, he’s clutch as well.

“I don’t know that the odds are calculable because night golf is so rare,” Moore said, “but these odds have to be astronomical.”