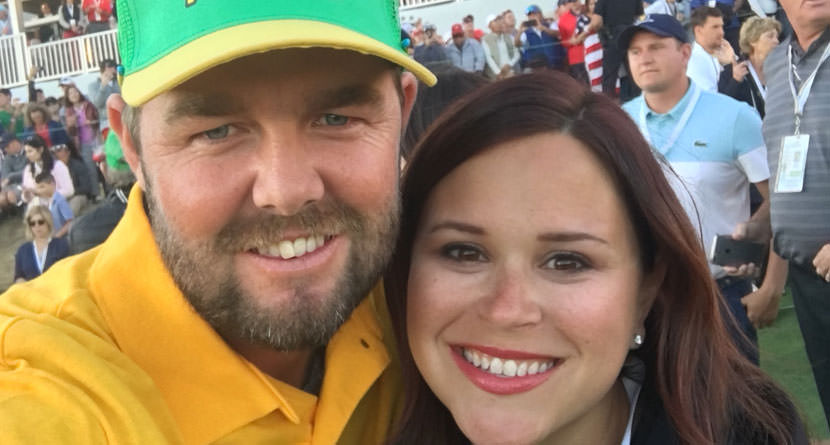 Fans of the United States Team were encouraged by the showing on the course at Liberty National last week at the Presidents Cup, but not all American golf fans were pleased. Audrey Leishman, the wife of Marc, an Australian ranked 16th in the world, berated the U.S. fans and even a player in a lengthy blog post on Tuesday.

Audrey, a native of Virginia Beach, married Marc and the three have three children together. In her post titled “This Is Not The TOUR I Know,” Audrey called out Daniel Berger’s comments to Sky Sports, the boorish behavior of some fans as well as their hypocritical nature when seeking pictures and autographs.

“I mean the goal from the minute we got out here was to just crush them as bad as we can and, um, I hope that we close them out today and we go out tomorrow and just beat ’em even worse.” -Daniel Berger

Last week was hard on my heart. That video right there pretty much sums up why. The fans felt the same way. I wonder why when that’s what they witnessed…

There were many times last week that I thought about what the kids were seeing. The crowds booing for good shots and cheering for missed putts. The drinking at 7am? Screaming “Big Easy” to Ernie Els and begging for his autograph and then yelling at his players. Heckling a wife for her beauty and then her husband for his play. I was thankful my boys weren’t there to see the way people were treating their daddy. Their hero. My parents could simply turn the television off.

I enjoy that true golf lovers want to watch good sport, even if it’s not coming from their favorite players. It’s common to find applause for bogey putts at normal events. The players politely put up their hand in acknowledgment no matter how frustrated they are. Of course, there are times when the game gets the better of them, and clubs end up broken or in the water, but that is not the norm. In fact, it is so frowned upon that players will be fined by the PGA TOUR for poor behavior. They hold their players to a high standard. They recognize the role models the players should be to their young fans.

Golf is truly a gentleman’s sport. But last week was not the golf I know. During the opening ceremony, I was enjoying the Fanatics singing their songs that most people have come to love when I heard an American scream, “Speak English!”

1. What an awful and ignorant thing to say.

2. They were speaking English.

3. Half of the International Team is bilingual. How many languages do you speak?

The rest of the week didn’t get much better nor did the insults. Someone yelled “Blooming Onion!” to Marc. Check yourself and your facts because that’s not Australian in the least. Another yelled, “avocado!” at him. I feel sorry for you because if you don’t understand how delicious an avocado is, then you are living a sad, sad life. “You eat cereal with a fork!” Oh friend, maybe that’s actually you who does that, because how would you even think to say that? I understand that this was not every fan. In fact, I believe that most of the people acting that way were not actually golf fans. Unfortunately, that doesn’t change the fact that they were the loudest and that the people around them did not ask them to stop.

By Sunday afternoon when America won, the crowd calmed down some. All of a sudden they liked our guys again. Yelling for autographs and pictures. And what did our guys do? They signed and smiled. When we were waiting on the 14th green for the closing ceremony all of us were distracted and chatting. Captain Price got our attention and asked us to start clapping for the American Team. Because that is what golf is. That is what sportsmanship is. That is why I was so proud to be part of the International Team. You will not find a kinder group of talented men.

You can read Audrey’s post in its entirety here.