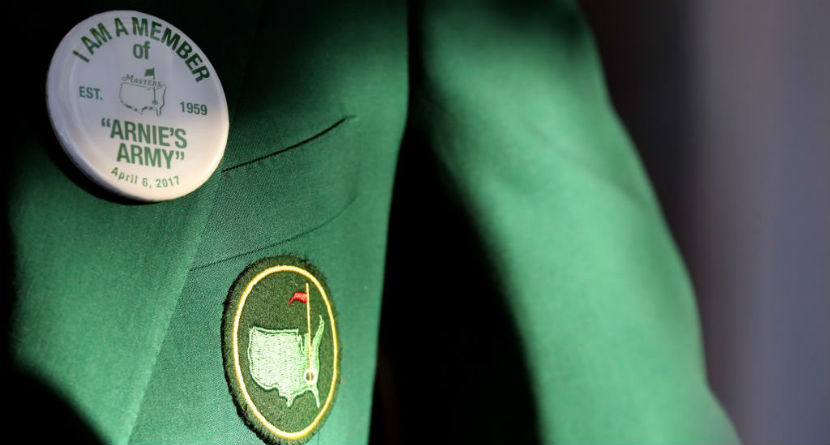 Augusta National Golf Club is more than just a golf course that plays host to the Masters. It is also a brand and a business with the power to take down whoever uses their property without permission.

On Monday, reports revealed that the company that owns the rights to everything Augusta National has filed a lawsuit against a memorabilia company which was auctioning off three green jackets, one of which was worn by Byron Nelson in 1966, along with other items.

The Associated Press has the details:

The champion’s green jacket is awarded each year to the winner of the Masters tournament, “and is, probably, the most coveted award in the golfing world,” the lawsuit says.

The same rules apply to the member green jackets, except they may never leave Augusta National grounds, the lawsuit says. Each jacket is marked for identification and authenticity.

“It appears that Augusta National Golf Club is attempting to assert ownership claims to every green jacket ever produced, regardless of who currently owns or possesses the jackets,” Green Jacket Auctions co-owner Ryan Carey said in an email. “Obviously we at Green Jacket Auctions dispute such claims, and will litigate the matter, if necessary.”

The lawsuit says Augusta National recently learned Green Jacket Auctions was advertising a sale that includes the champion’s green jacket worn by Byron Nelson in 1966. The jacket was where it was supposed to be, in storage at Augusta National, during a physical inventory in 2009. But a recent check determined that it is now missing, the lawsuit says.

By mid-afternoon Monday, the online bidding on the jacket, which closes at 8 p.m. Saturday, had reached $114,874.

Green Jacket Auctions is in “wrongful possession” and does not hold the legal title, the lawsuit says.

Additionally, the online sale includes silverware stamped with the trademarked Augusta National map and flag logo. Augusta National does not sell or give away the proprietary silverware, so the only way someone could get it is to steal it from the golf club, meaning the silverware listed in the sale is either stolen or counterfeit, the lawsuit says.

Green Jacket Auctions’ “marketing efforts are clearly intended to draw upon the valuable reference to the Augusta National Golf Club and the extensive secondary meaning associated with (Augusta National Inc.’s) Marks, and ability of consumers searching those trademark names to land on the offending website,” the lawsuit says.