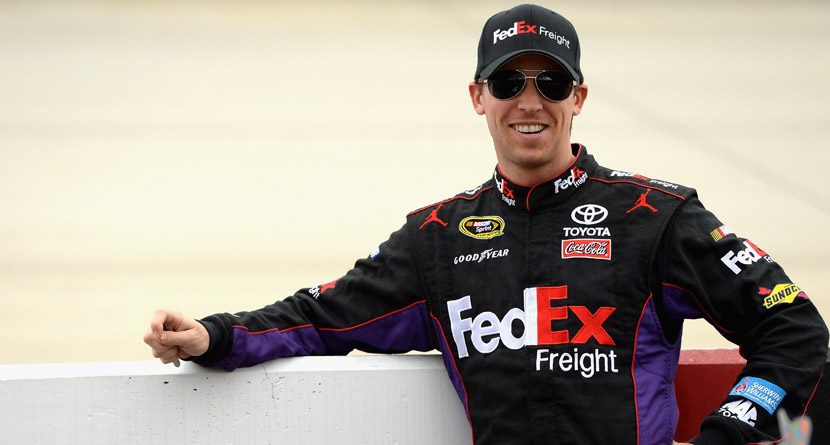 If there’s one thing I love as much as golf, its NASCAR. That’s right, that’s no typo. I love me some adrenaline-pumping, rubber-burning action and with the Daytona 500 right around the corner, it seemed high time that one of NASCAR’s best golfers got certified. Back 9 Certified, that is.

Now, I’m not going to lie to you — Denny Hamlin isn’t my favorite Cup series driver. That would be Hamlin’s teammate Kyle Busch. But Hamlin is a hard to ignore for a number of reasons. He’s the king of cool in the sport right now, and here’s why we (and everyone else should) love Denny Hamlin

A Winner On the Track

Since he made his debut in the NASCAR Sprint Cup Series in 2005, Denny Hamlin has been a proven winner. He won twice in his rookie year (three times if you count the season-opening exhibition), the Sprint Unlimited at Daytona, and finished third in the final standings, the highest finish ever by a rookie in NASCAR’s modern-era. Since then, he has amassed 21 more wins in the Cup series and has won 13 times in NASCAR’s two lower divisions. Hamlin’s best career points finish came in 2010, when he nearly unseated then-four-time consecutive champion and fellow NASCAR golfer, Jimmie Johnson, finishing second by just 39 points. He also won eight times that year, not only a series high for 2010, but also his career best.

A Winner Off the Track

And when he isn’t giving back and donating to charity, he’s giving gifts to his friends… like this fire suit to good friend and Masters champion Bubba Watson.

Speaking of golfers, Hamlin is a pretty avid one. Hamlin plays all over and, according to his website, is a 12 handicap. Although, others close to him will swear that number is only to maintain a gambler’s edge, and that Hamlin is probably a single-digit stick. While YouTube lacks videos of Hamlin showing off his swing, he does have a number of golf pictures on his Twitter account to prove the claim.

He has also teed it up in the American Century Championship, the marquee celebrity golf tournament that doesn’t take place at Pebble Beach. Any chance he gets, Hamlin loves to talk about his golf.

Perhaps Hamlin’s most famous golf experience was when he caddied for Watson during the par-3 contest prior to the 2012 Masters. He even got a chance to make Watson’s birdie putt on the ninth hole, but unfortunately just missed. NASCAR is obviously a sport driven by sponsor dollars. Companies are clearly branded on every car and most TV segments or events are “brought to you by” somebody. With that in mind, today’s drivers need to be marketable and Hamlin is just that. Hamlin has starred in dozens of commercials for FedEx, Coca-Cola, Sprint, Toyota and anyone else that has slapped their name on his car. Over the years, Hamlin has had his share of memorable TV spots. Most of them are pretty funny.

One sponsor that really makes Hamlin stand out is his partnership with “Jumpman,” Michael Jordan’s brand. Hamiln even ran a “Jumpman” scheme truck at Martinsville a couple years back. Like many who decide to strap themselves into these rockets for a living, Hamlin knows the risks his profession possesses and hasn’t been immune to the pit falls of driving a race car. That being said, he’s never really let it slow him down. Hamlin broke his back in a crash last March after a wreck with rival and former teammate, Joey Logano. Hamlin made it back to the track that season and won the season-ending Ford 400 in Miami. In 2010, Hamlin won a race at Martinsville with a torn ACL in his left knee. He had surgery the following day and two weeks after surgery, won at Texas.

The Man has Moves

Another reason why Hamlin is so marketable and such a fan favorite is because he’s in touch with what the “kids are into.” Whatever the craze, Hamlin seems to know. He’s not only “Dougied” during driver introductions, but he’s also “Wobbled” during them. Anyone willing to do the Dougie or Wobble in front of 300,000 people has to have some confidence and charisma. All that, coupled with his undeniable talent makes Denny Hamlin Back9 Certified.