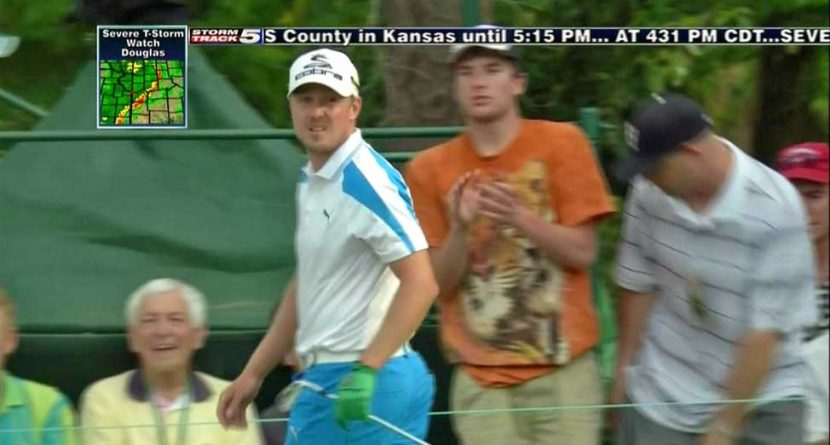 During the final round of last year’s Masters, you may have seen a peculiar (i.e. AWESOME) t-shirt behind Tiger Woods as he teed off on Augusta National’s 16th hole.

That man’s name is Kane Zipperman, a teenager who became an internet sensation seemingly overnight. Well, he was back in his same seat during today’s final round, and the television cameras were on point once again.

Thanks to the wonders of modern technology (i.e. Twitter) I was able to reach out to Zipperman for a quick email interview to learn more about the man behind the Tiger T-Shirt.

Adam Fonseca: First of all, thank you for your time this evening Kane. I’m sure you’re still stuck in Augusta traffic leaving the course. Tell us a little about yourself. Where are you from? Age? How long have you been attending the Masters?

Kane Zipperman: I’m from a sketchy small town about 30 minutes north of Atlanta, called Canton. If you were to compare the city size to a human, I’d say it’s about a Rickie Fowler… pretty small. I’m 17 and have been attending the Masters every Sunday for the past 7 years.

Where did you find a bright orange tiger t-shirt? Is the shirt you wore today the same one you wore last year?

Well I saw it at Walmart, and being the huge Tiger Fan that I am, it was love at first sight. I immediately thought of wearing it to the Masters and supporting the #1 Golfer in the world. Before I saw the shirt at Walmart, I didn’t believe in love at first sight. But afterwards, I believed in it 100%. Me and the tiger on the shirt made eye contact, and we just fell in love with each other. But yes, it is the same shirt. And yes I washed it…. I’m not that ratchet.

How disappointed were you that Tiger Woods didn’t play in this year’s tournament? Did you consider not attending?

I was very disappointed but The Masters is so majestic that I had to go. Besides the Playboy mansion, there is literally no other place in the world I’d rather be.

This is what happens when you insist on having the most prestigious golf tournament in the world in Georgia. pic.twitter.com/UaZ2MJB3rd

Do you play golf in your free time? Are you on a high school team?

Well I’m a Senior in high school and I play travel baseball and basketball so I rarely have time to play golf, but I play as much as I can. To be honest, I’m not the best golfer in the world. The best I’ve ever shot is probably around a 102; pretty impressive.