Back9 in 90 – Metropolitan Golf Association & GOLFWORKS 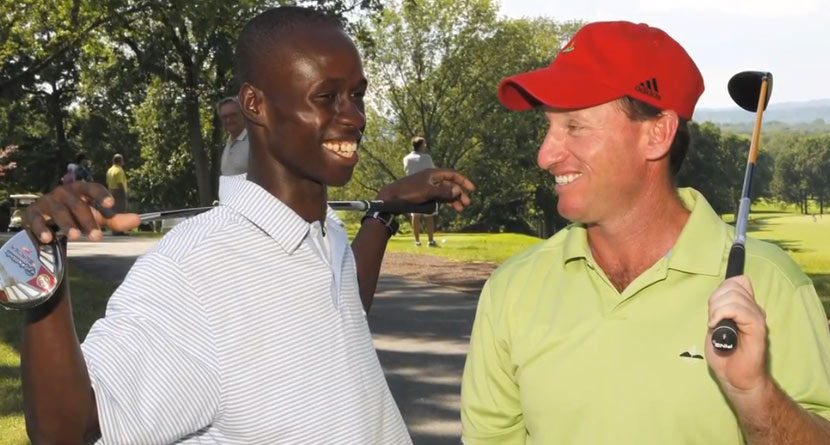 Related Link: Back9 in 90 Hub Page

It was 7 o’clock in the morning when I picked up Charles in Hartford. We slugged down a cup of coffee apiece and began the 3-hour trek to Scarsdale, New York—to Quaker Ridge Golf Club. Once the clouds cleared and the sun warmed the course, by 1 o’ clock it became the perfect day for a golf outing.

The course itself is great—Jimmy Demaret once said it was the most underrated golf course in the New York area. The clubhouse is Tudor-styled with a small pool that I can only imagine is packed to the gills during those hot summer days.

The money raised that day was going toward the Metropolitan Golf Association’s Golfworks program.  And like any other organization or charity or fund or program or association whose name I’m hearing for the first time, I glazed over it.

It wasn’t until I met Freddy Figueroa that I knew how special the program really was. Freddy is a sweet, shy kid; before his interview with us, he was standing near the camera shaking like a leaf, nervously shifting back and forth. He grew up in the Bronx and had never stepped foot on a golf course—let alone worked at one. But here he was, in khakis, a pink button down shirt and navy sweater—telling us about his dreams of being a doctor and the people he met on the course who are helping him along the way. For a kid, especially a teenager, knowing how to communicate and be confident is everything. I never had that when I was younger. And I didn’t really figure out until later in life that being able to truly connect with people and making others feel comfortable with you is 80 percent of the battle.

The MGA created Golfworks in 1994—back when there were only 12 kids working at six golf clubs in the region. Now, there are 225 at 85 clubs. What I like about this program—what’s different about this program—is the skill set it gives kids. It’s not about working at a golf club or learning how to play the game. It’s about learning how to talk to people—and feel confident around people who you think are better than you because of how much money they make, or where they grew up. You enter Golfworks as one person, but you leave the program with many.

Related Link: Back9 in 90 Hub Page