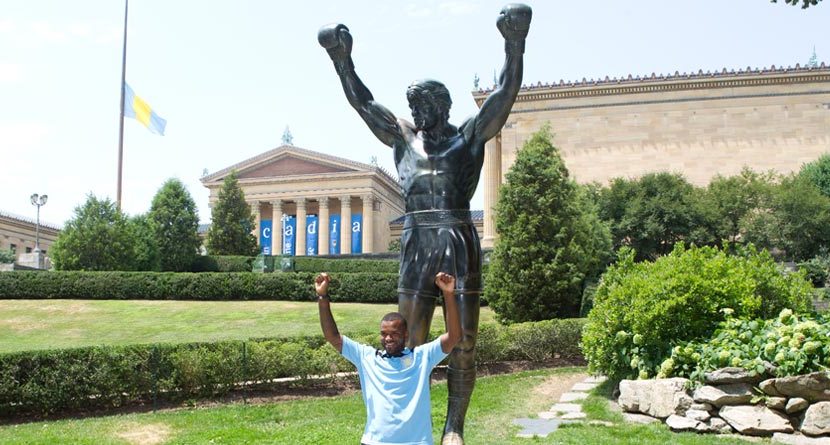 Can you name the building the Rocky Steps lead to in Philadelphia?

We’ll give you a few seconds.

You may not have known that that the 72 stone steps bring visitors to the entrance of the Philadelphia Museum of Art. They’ve simply been known as the Rocky Steps ever since Sylvester Stalone ran up them in the 1976 film “Rocky” and four of its sequels.

Ever since the timeless scene was viewed by millions across the world on the big screen, the steps have taken on a life of their own.

Stallone had a bronze statue of the Rocky Balboa character (a boxer) made and installed at the top of the steps for the filming of “Rocky III.” Three statues were actually made — one for the Museum of Art, one for the San Diego Hall of Champions Sports Museum, and another that was eventually put on eBay with an astronomical starting bid of $5 million. The money from the sale would benefit the International Institute for Sport and Olympic History. To this day, the statue has yet to sell.

After “Rocky III” was filmed, the city of Philadelphia’s Art Commission had a public feud with the Art Museum regarding the statue atop the steps. The Art Commission felt it was more of a movie prop than a piece of art, so ultimately it was relocated to the front of the Wachovia Spectrum, located in the South Philadelphia Sports Complex.

In place of the statue was left a bronze inlay of footprints left by a pair of converse sneakers, which the Rocky character wore.

Fast forward years later to 2006. City officials came to their senses and moved the statue back to the Art Museum. So now it sits in a grassy area close to the foot of the steps for all to see.

The steps have made countless other appearances in TV, film and pubic events. Philadelphia native Dawn Staley ran up the steps carrying the Olympic torch during the 1996 Olympic torch relay. 2004 Presidential candidate John Kerry made a speech at the foot of the steps before accepting the Democratic party’s nomination.

Even “The Simpsons” have included the steps in an episode.

The steps have become more than just a means of entering the Philadelphia Art Museum. They’ve become one of the lasting images of Philadelphia history.

Next Page: #Back9Philly: The Toughest Golfers