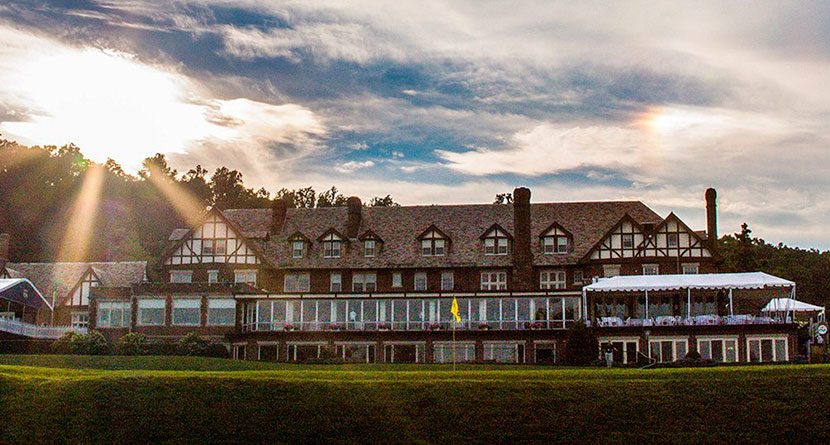 The PGA Championship kicked off today in Springfield, New Jersey at Baltusrol Golf Club, which is hosting its 17th large-scale golf tournament, but its first since 2005. Given that it’s been more than a decade since the course has been in the national spotlight, now is the perfect time to rehash the mysterious and homicidal reason the course has one of the most unique names in golf.

It all goes back to the mid 1800s when a farmer named Baltus Roll lived on the property that the golf course now sits upon. As the legend goes, Roll had earned a reputation as a penny-pincher and was rumored to have his considerable net worth stashed somewhere on his property. Zach Schonbrun of The New York Times takes over the story from there.

When the 98th P.G.A. Championship begins Thursday at nearby Baltusrol Golf Club, fans might wonder about the club’s name. Some might know the ridge poking up from behind the fifth green as Baltusrol Mountain. Others might know the leafy street in Summit above Interstate 78 as Baltusrol Road.

What sometimes gets lost to history is that the road, the mountain and the world-famous golf course are linked by the memory of a farmer and the macabre legend of his coldblooded murder on a wintry night in 1831.

In life, Baltus Roll resided with his wife, Susannah, and son on what was then a far less populated ridge, where they grew apples and raised livestock.

At around midnight on the rainy night of Feb. 22, 1831, Roll, then 62, and his wife were woken by a loud pounding on the door. A man called out that he was looking for directions to some indecipherable place. Then the voice quickly followed up by asking, “Are you not going to get up?”

When Roll answered no, the door burst open. Two men rushed in, grabbed Roll from his bed, beat him and dragged him outside into the cold.

According to his widow’s testimony in a Newark courtroom in June 1831, she saw the two men tying up her husband in the yard with a thick white rope.

“The large man was at his head, choking him,” she said. “I did not see him stir, nor did I hear him make any noise. I heard them say to him, ‘Lie still and we will not hurt you.’ I thought he was dead.”

Susannah Roll ran for cover in the woods. At daybreak, she returned to the house and saw her husband atop a snowbank, stripped of his clothes, bound at the wrists and ankles, lying lifeless. The door of the house was open and she thought the murderers might still be inside, so she ran to the nearest neighbor, Jesse Cahoon, about three-quarters of a mile down the road. Together, they returned to the house and declared Baltus Roll dead.

Within days, two suspects emerged: Peter B. Davis, an opium addict who made no secret of his need for money, and his accomplice Lycidias Baldwin. Davis was captured on March 1, and Baldwin, upon hearing about Davis’s arrest, fled to nearby Morristown and apparently overdosed on laudanum, a cocktail of morphine and alcohol, a day later.

Today in 1831, farmer Baltus Roll was murdered in NJ. His name, in a protracted form, immortalized at Baltusrol GC. pic.twitter.com/wGBGtmETLj

“It was like the trial of the century,” Wolffe said. “It was a widely followed trial in the newspapers of the day.”

James Lum, Baltusrol’s communications manager, dug up the old court transcript, which ran 32 pages long. The trial lasted less than a week but involved 94 witness testimonies. One witness said that he had seen Davis about a week before the murder inquiring about where Roll’s house was located.

But, with regard to the murder, Davis maintained his innocence. He claimed he had spent the night of Feb. 22in Camptown, N.J. (now Irvington), although a witness who was supposed to be staying with Davis that night maintained he had not heard Davis enter. The next morning, Davis was at the bar downstairs. His horse was soaking wet. Davis said the stable must have leaked.

After a stirring, four-hour closing statement by Davis’s lawyer, William Halsey, the jury deliberated for only about three hours before returning a not-guilty verdict.

Davis did not have much time to celebrate. On July 4, he was arraigned before the court on four indictments for forgery. He pleaded guilty to three of them and later died in prison.

Sixty-four years later, in 1895, an opportunistic social climber named Louis Keller constructed a nine-hole golf course on the property near Roll’s old farm. According to Wolffe, one of the club’s eight founding patronesses suggested to Keller that the name be Baltusrol, after the already-named mountain and road.

The singularity of the name remains a conversation piece for members and visitors.