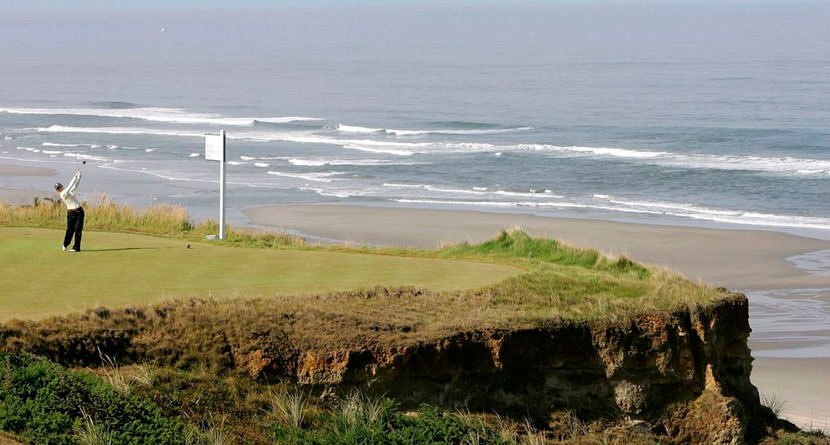 One of the country’s most popular golf resorts has found itself in the midst of a sexual harassment scandal. Bandon Dunes, a resort that features four links and a par-3 course outside of Bandon, Oregon, was named in a lawsuit, along with its parent company, KemperSports, alleging sexual harassment, misconduct and executive inaction.

Golf.com’s Sean Zak had the details of the lawsuit.

The longtime general manager of Bandon Dunes, Henry Hickox, and Chicago-based KemperSports are being sued by a female employee for emotional distress, humiliation, damages and medical expenses for sexual harassment that played out over the past two decades, according to a report by Sara Roth of KGW News, a Portland-area NBC affiliate.

The charges, filed by Darla Hamblin, the resort’s director of reservation services, allege regular inappropriate comments and touching carried out by Hickox. According to the report, lawyers for both Hickox and KemperSports have admitted that incidents occurred but said they “don’t rise to the level of sexual abuse.”

Longtime @BandonDunesGolf general manager accused of blatant sexual harassment, telling employee she needed to be “serviced” regularly and he was “up for the task” https://t.co/DTYpdluZA7 pic.twitter.com/QUXBAjcqC2

According to KGW News, the lawsuit was set for trial this week, but was struck from the court schedule.

In a statement to GOLF.com, KemperSports’ director of communications B.R. Koehnemann, wrote, “The article that was written yesterday refers to a case that has been withdrawn. On Friday, November 10, 2017, Ms. Hamblin acted to dismiss the lawsuit. The court was informed and the case was removed from the docket. When informed of the alleged inappropriate behavior at Bandon Dunes, the Company took decisive remedial action, and Mr. Hickox is no longer employed by KemperSports or Bandon Dunes. Independent outside counsel has been retained to further investigate the situation.”

He added, “Since our founding nearly 40 years ago, we have been committed to providing a workplace environment that is rewarding, comfortable and free from discrimination and harassment.”

Koehnemann declined to say if the suit had been settled outside of court.

Hamblin’s trial brief alleges that Hickox forcefully kissed Hamblin after a work party in 2015. She says he grabbed her “with both arms while inserting his tongue into her mouth.”

A trial memo for Hickox says that the kiss “cannot fairly be characterized as a sexual assault and, in any event, Hamblin did her own share of kissing.”

KemperSports’ trial memo argues that it is not liable for Hickox’s behavior. It also says that Hamblin is unable to prove she was sexually harassed and that “one kiss does not a lawsuit make.”

Hamblin’s suit was supported in a declaration by former KemperSports employee Adrienne Fitzgerald, who alleges similar misconduct from Kemper executives, and that the largely male executive team “are the epitome of a Boy’s Club and treat the workplace like a high school locker room.”

Fitzgerald alleges that her complaints were dismissed by KemperSports executives and says the ongoing harassment led her to resign in April 2017. The company has not formally addressed Fitzgerald’s allegations.