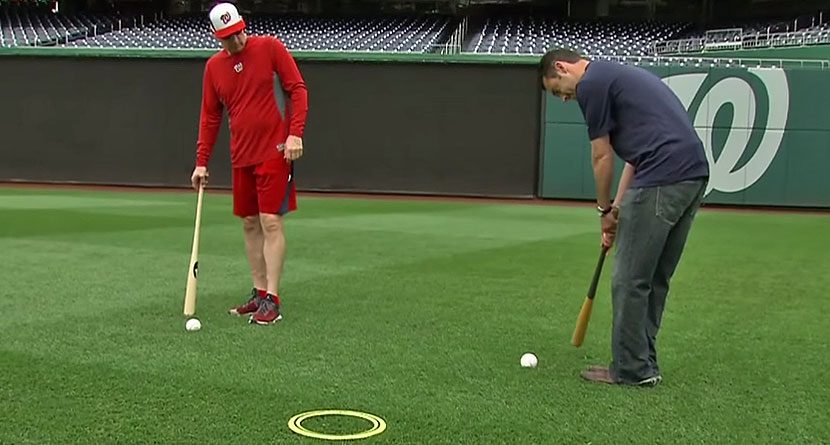 Creating hybrid versions of the traditional golf game seems to be all the rage nowadays. There’s Disc Golf, FootGolf, Hack Golf, and of course Ripped Links to name a few. But here’s one you may not have heard of: Fungo Golf.

It consists of a baseball bat, a softball and a flying disk. The goal is to hit the ball into the disk in the least amount of strokes. As crazy as it sounds, it’s apparently become a popular game among baseball teams.

Washington Nationals manager Matt Williams is a big fan of Fungo Golf. He and MASN reporter Dan Kolko recently played a round at Nationals Park where they seem hit shots from every spot in and around the stadium… including one from the stands.

I wonder what Bryce Harper’s handicap is.

Other Hot Links:
– 11 Most Memorable Ryder Cup Moments
– Performance Friday: PGA Professional Tim Johnson
– Best Crowd Moments In Ryder Cup History
– The Lion Sings Tonight: John Daly Hits It Hard In His Car
– What Do Dufner and A Smurf Have In Common With Auburn Football?
– The Fringe: Getting Pumped Up For The Ryder Cup
– 5 Players Team Europe Needs To Play Well At Ryder Cup
– Tiger Woods: ‘I May Just Do It On My Own’
– Royal & Ancient Votes To Allow Female Members