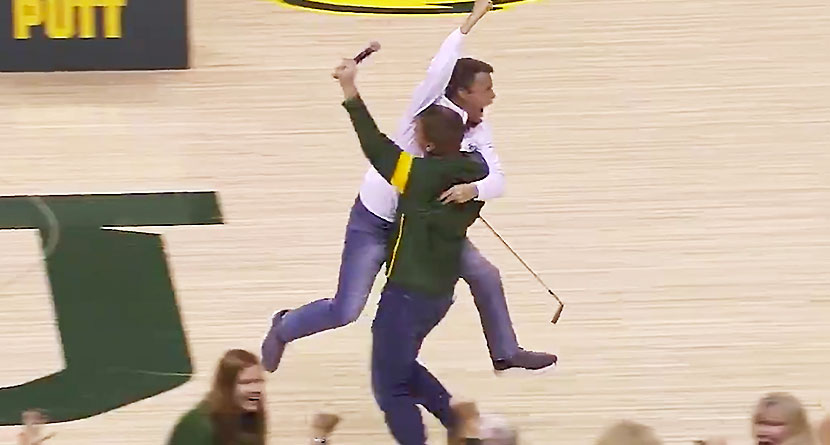 What was the longest putt you’ve ever made with money on the line? A 5-footer… a 10-footer… a 20-footer?

Imagine the pressure you felt over that putt, and now put yourself in the middle of a basketball arena with thousands of people and a national television audience with $5,000 up for grabs.

While the pressure of the moment can be debated — after all, there was no downside to missing — Ky Carlson rose to the occasion over the weekend during a Baylor University basketball game. During the under-8 minute media timeout, Carlson was selected to participate in the Mattson Financial Services Putt.


There were three putts to be struck, each at different distances for different amounts of money, but the full-court, 96-foot putt for $5,000 had never been holed in the 16 years the contest had been going until Saturday night. Carlson missed the first two putts, and then he lined up the big-money third one…

For the first time in the 16-year history of the Mattson Financial putt … $5,000 richer!#SicEm #SCtop10 pic.twitter.com/w8d6LFNf5I

Carlson struck the putt a bit out to the right, but whether due to an uneven surface, fan-provided wind or divine intervention, his putt broke right-to-left as it neared the opposite foul line, climbed the miniature green and caught the edge of the cup.

The Ferrell Center exploded as Carlson celebrated as if he had won the Masters.

“As soon as I hit it, I know I pushed it off to the right, but as it goes past halfcourt, it starts to curl back in,” Carlson told KWTX.com. “It keeps getting closer and closer, and then all of a sudden, it’s pandemonium. It pops on the green and goes in. Nobody could believe it, including me, so that was pretty amazing.

“The host came and grabbed me, and then ran to half court with me. I was just so pumped up. The mascot came up and I grabbed him. It was one of the most exciting things I’ve ever done in my life.”