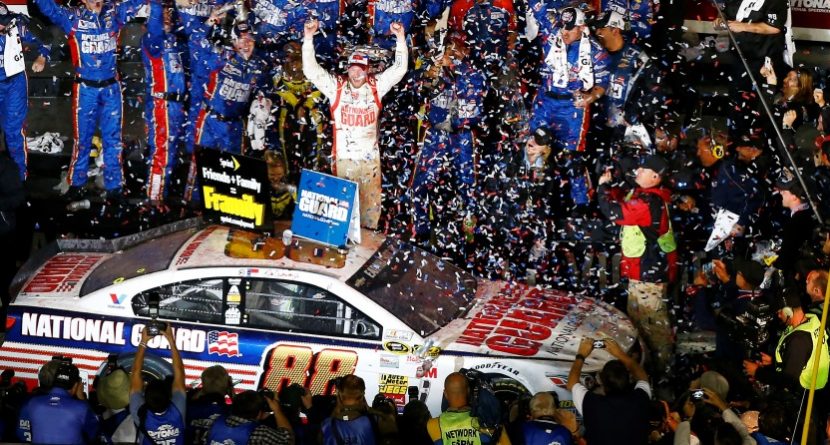 Your favorite race car driver, Dale Earnhardt Jr., just won the Daytona 500. It’s his second career triumph on NASCAR’s biggest stage, and Junior’s first victory in 55 races. He’s all over the news, he’s appearing on TV shows, and he’s even joined Twitter. You couldn’t be happier.

Naturally, to celebrate you want to decorate your Chevrolet to be just like Earnhardt’s. Problem is, you’re married or have a respectable job. No wife or boss wants to see you driving up to the house or office with your car buried in decals.

Fret not. You can spruce up your golf cart instead. Dale Earnhardt Jr. golf cart decal kits are selling for less than $60 on Amazon.com. Once the decals are affixed, tweet a pic to @DaleJr. You could be his first re-tweet. Or the first person he follows. As of this moment, he’s sent out nine tweets since winning Daytona, he follows no one, but is creeping toward half a million followers.

Better yet, buy some Dale Earnhardt Jr. golf knickers, then snap and tweet a photo of you and the golf cart. Maybe he’ll feel the love and come race your golf cart around a golf course. Other Hot Links:
– What If the PGA Tour Held a NFL-Like Combine?
– Who Is the Jadeveon Clowney of Golf?
– Countdown is On: 2016 Rio Olympics Golf Primer
– It Takes Two: Friends Team Up For Amazing Trick Shot
– Tweek in Review: The Week’s Best Tweets