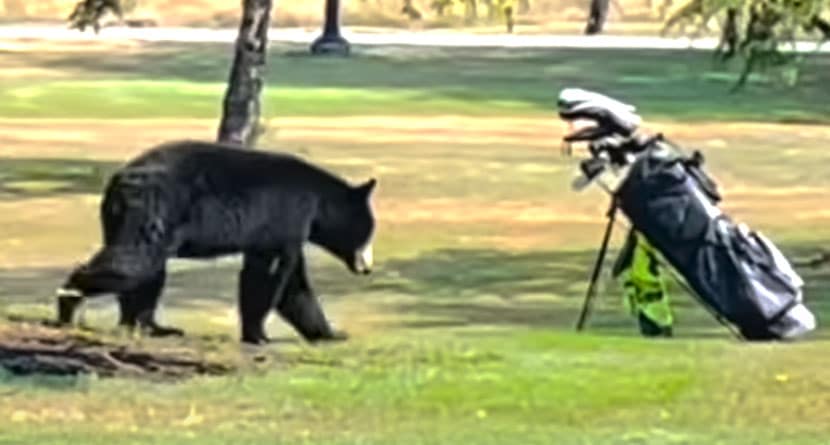 While golf courses in Canada were closed due to COVID restrictions, it appears some of the wildlife got a little more comfortable on the well-manicured fairways of Swaneset Golf Course and Country Club in British Columbia.

Tim Jeves found out firsthand just how content a particularly intimidating wild animal was on the course recently as he was distracted from hitting his shot 12th hole recently.

As For The Win reported, a bear was startled by a golfer in a cart on a different hole, causing the bear to charge directly at Jeves.

“Do I make myself big and back away or do I run?” Jeves asked himself. “I knew I’m supposed to do the former for a cougar but couldn’t remember whatever advice I’d been given for a frightened charging bear.

“Honestly, I didn’t have time to really think. I won’t say I ran, but I definitely didn’t back away slowly. I was moving quickly and loudly calling out ‘Hey bear! Hey bear!’ To try to scare or slow him. It didn’t. The one thing I did do, which I later thought was stupid, was drop my club. The one thing that might have slowed him if it had come at me.”

As Jeves backed away, the bear didn’t go after him, instead he was intrigued by something else: Jeves’ golf clubs.

The bear inquisitively poked around the bag, seemingly spooked by the clubs before climbing a nearby tree.

Being scared of some clubs is something golfers of all abilities can relate to.