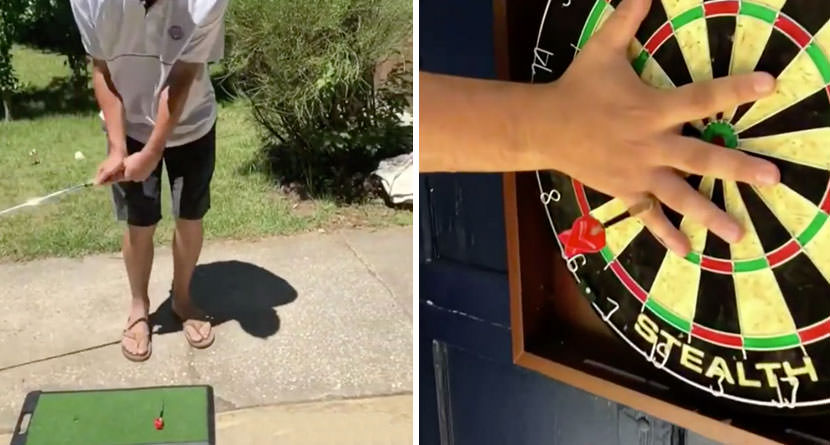 Golf trick shot artists keep one-upping each other, and this latest from SxS ambassador and Swing-U instructor Josh Kelley is downright absurd.

Luckily for us here at SwingxSwing, we get to call two of the best golf trick shot artists in the business — Kelley and Ryan Rustand — colleagues. Kelley shared the inspiration behind his latest viral trick shot with us.

“I did a trick shot about a month back with the game Jenga that went viral, so I thought to myself, ‘what other games can I put a golf trick shot swing on?’ Kelley said. “Darts just seemed like the next best game.

“The original idea was to chip the dart and get a bullseye, but my brother-in-law JoJo happened to pull up to my house just as I started trying the shot. I was getting close a few times and that’s when I jokingly said, ‘hey man stick your hand up there it will go viral.’

“He’s said, ‘I’m down.’ It was 11 a.m. on a Sunday, so he didn’t have any liquid courage and didn’t need it. We got the shot second try. The first one was about eight inches from his hand.”

Going viral is nothing new for Kelley who seemingly pops up across social media on on sports television shows with regularity, so did he know instantly this was going to be a classic?

“I’m not sure exactly where this shot ranks, but I would definitely say it’s in the top-10. It’s certainly one of the most dangerous shots I’ve done.”

Check out more awesome trick shots from Josh (and Coach Rusty) by following them on Instagram.