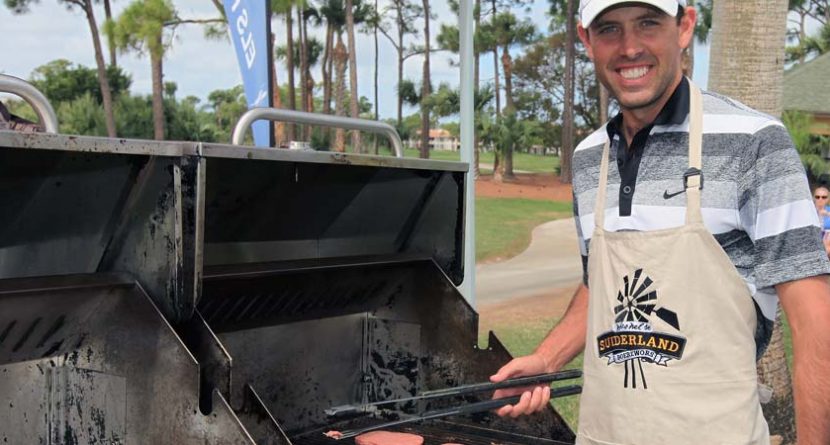 Before Masters champions try to stick it close with their irons on Thursday, they stuff their faces on Tuesday night at the annual Champions Dinner. The previous year’s champion picks the menu and even foots the bill for the dinner.

Since we haven’t won a Masters (yet), we haven’t been able to attend any of the dinners. But nevertheless, here are our picks for some of the most noteworthy menus from Masters past.

International champions usually pick a menu inspired by their home countries, from Jose Maria Olazabal’s paella meal in ’95 to Bernhard Langer’s wiener schnitzel feast in ’86. But Mike Weir took everyone’s taste buds to the Great White North in ’04 when he served wild boar, elk and a fish called Arctic char. Weir gets bonus points for also serving Canadian beer. We bet his left hand was clutching a Molson all night.

Tiger Woods was not a normal 22-year-old in 1998, but he pretended to be one with the uninspiring choices of burgers, chicken sandwiches, French fries and milkshakes for his first Champions Dinner. “Get it, guys? I’m young! I don’t even eat grown-up food yet!”

Most Likely to Make You Secretly Spit Food Into Your Napkin

The Masters tournament might use a sudden-death playoff system, but for this award there was a tie: Sandy Lyle’s haggis in ’89 and Trevor Immelman’s bobotie in ’09. On one hand, we can appreciate the international flair; on the other hand, haggis is sheep’s stomach and bobotie is an egg-and-meat pie that looks like this. We bet there were a lot of trips to the Champions bathroom that night.

Vijay Singh’s spread of Thai food in 2001 initially had some of their older champions calling for the maitre’d, with Jack Nicklaus exercising his option to pick something off the “regular” menu. But egged on by Tiger Woods, Nicklaus and Byron Nelson each indulged heavily in the feast of seafood tom kah, curry, scallops, lamb and sea bass. Rumor has it that Jack had 18 helpings, while Tiger just couldn’t seem to get past 14.

We’ll see how Jordan Spieth’s Texas barbecue stacks up this year, but our money’s on it not cracking this list.