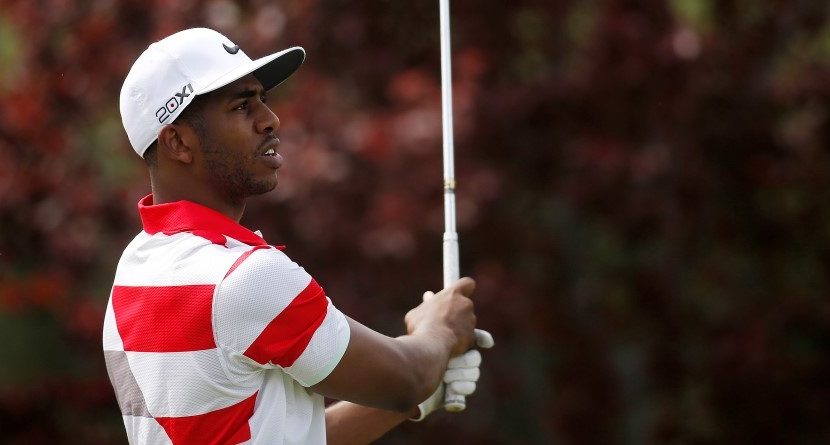 Previous page: Back9 In 90 – Jason Collins Opens Up

When Dwight Howard signed with the Los Angeles Lakers late last summer, no one expected the squad of perennial All-Stars to be making tee times in early May. But after the West’s No. 7 seed was handily swept out of the NBA Playoffs by San Antonio, some rather tall millionaires began to hack up Southern California’s finest courses. They were joined soon thereafter by their co-tenants at the Staples Center, the Clippers.

Yet as we moved out of the second round of the playoffs, the level of play on the golf course really picked up. We’re sure guys weren’t trying to give themselves more practice time off the tee, but a few who will be making charity and/or celebrity appearances now can book as many tee times as they wish.

With that, following are the best golf-playing NBA athletes who now have the freedom to play a few rounds, and players who may soon be joining them:

1. Deron Williams, Brooklyn Nets
Williams averaged 20.6 points a game in helping the Nets come back from a 3-1 series deficit to force a Game 7 in Round 1, but they couldn’t close out the Bulls. Williams will now focus on the famed celebrity golf tournament in Lake Tahoe, the American Century Championship, July 16-21. Williams debuted in 2011, when he tied for 46th overall, but placed second among active NBA players (Ray Allen was first). He’s dabbled in golf for only about six years, but he’s developed a nice swing.

2. NEW – Jason Kidd, New York Knicks: Kidd and Deron Williams ignited some Twitter speculation last summer that the two might join the same team as free agents after playing golf together. But in the end, Williams stayed with the Nets and Kidd joined him in New York, but signed with the Knicks. Now that New York has been ousted by Indiana in the second round, Kidd and Williams can meet up on the links again. Apparently they won’t be battling in Lake Tahoe, however, as Kidd was recently removed from the player list (as of May 16).

3. NEW – Stephen Curry, Golden State Warriors: Few expected Curry and the upstart Warriors to get past Denver in the first round, but they did and then made San Antonio work hard in the second round. Curry will need some time to rest after dropping 23.4 points a game in the postseason, but he’ll dust off the clubs soon enough to prepare for the 2013 Curry Celebrity Classic and the Lake Tahoe celebrity tournament.

4. Chris Paul, Los Angeles Clippers
Few expected to see Paul in a tee box so early when his Clippers took the first two games of their first-round series against Memphis, but the Grizzlies stormed back to win four straight. A stunned Paul probably needs a few days to recover before hitting the links, but he recently played in the Michael Jordan Celebrity Invitational, so his clubs aren’t that rusty. He’s an avid golf fan, and said he got some valuable tips by playing in the Pro-Am for the Wyndham Championship last summer with Davis Love III.

5. Paul Pierce, Boston Celtics
Pierce did his best to stave off first-round elimination against New York by leading the Celtics to victory in Games 4 and 5, but the Knicks’ Carmelo Anthony was too much to handle in the end. The latest battle in the perpetual Boston-New York rivalry goes to the Big Apple. But on the bright side, Pierce can get back to working on his golf game.

6. J.J. Reddick, Milwaukee Bucks
He could have been playing a week or so earlier had he stayed all season with the Orlando Magic, who finished with the NBA’s worst record (20-62). Instead, he was traded in February to the Bucks, who qualified for the playoffs, albeit with a losing record (38-44). Nonetheless, the quick exit allows Reddick ample time to organize the third annual J.J. Redick Foundation Celebrity Golf Classic in his hometown of Roanoke, Va.

7. Dwight Howard, Los Angeles Lakers
Howard’s exit from the playoffs was a little less classy than he would have liked – he was ejected from Game 4 – but he can now relieve some stress on the course. With the largest arms in the NBA, Howard is likely a beast off the tee. His accuracy with those drives, and every other shot for that matter, is what we’re more concerned with. Accuracy on the court is not his forte. But he has some nice clubs.

8. Corey Brewer, Denver Nuggets
You can’t blame Brewer for Denver’s surprising first-round exit — the No. 3 Nuggets fell to Golden State in six — but he definitely didn’t help the squad. Of the 10 Denver players who attempted at least one field goal in the series, Brewer’s field goal percentage (.309) was the worst. If he wanted more time to improve his golf game, he did his part to ensure that. The Nuggets may make the playoffs every year, but they’re still on Denver golf courses by early May.

9. Jimmer Fredette, Sacramento Kings
The Kings were nearly as bad as the Magic this year, so Fredette didn’t even sniff the playoffs. He probably planned his May 1 tee time shortly after the New Year. Then again, he’s pretty dreadful at golf, so maybe it’s not exactly his hobby of choice. But because so few basketball players excel on the links, Fredette was invited to the American Century Championship – the premier celebrity golf tournament – in 2011, before he even became a pro. He finished dead last and hasn’t been invited back since. It’s unclear whether that’s because of his golf game or the fact that his star status has declined rapidly since college.

10. Jeremy Lin, Houston Rockets
Lin missed Games 4 and 5 of the first round due to a bruised chest, his first absences of the season, but Houston won both games against Oklahoma City. He was cleared to play in Game 6, but came off the bench for the first time all year, and the Rockets abruptly lost to close out their season. Coincidence? Who knows? Either way, Lin now has more time for his new hobby.

UP NEXT ON THE TEE BOX?
— Mike Conley, Memphis Grizzlies: Conley and the Grizz are in the Western Conference Finals for the first time in the franchise’s history, so forgive Conley if he misses the tee time he arranged with you — no one expected Memphis to be playing in late May (at least before the Thunder’s Russell Westbrook got hurt). If you were to be in a foursome with Conley, though, just know that you could never match up with the best foursome of his life.