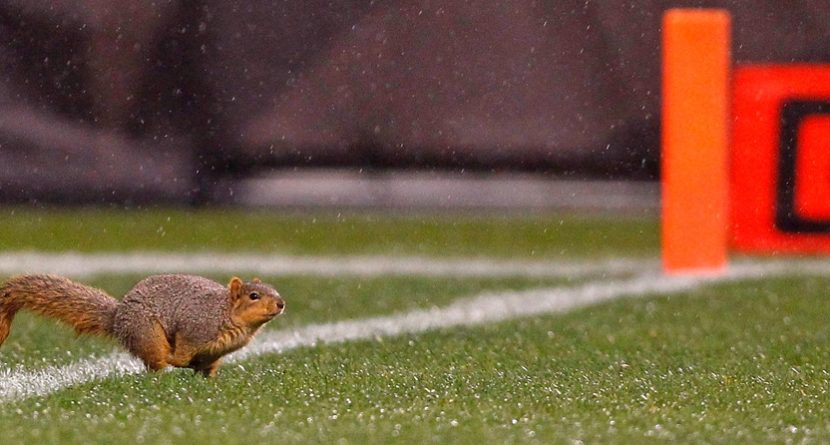 The U.S. Presidents Cup squad picked up – literally – an unofficial 13th team member Thursday at Muirfield Village, when captain’s assistant Davis Love III found himself a companion on his golf cart as he watched the fourball matches. He began feeding a squirrel, who enjoyed Love so much that he crawled onto his lap and hung out with the Atlanta Braves fan – shouldn’t he be wearing a Presidents Cup hat? – for much of the rest of the day.

When Olympic skier Lindsey Vonn saw Love’s furry friend, she scooped the squirrel out of Love’s pocket and promptly placed it on the neck of her boyfriend, Tiger Woods. Slightly bothered at first, Woods eventually relented and went along with it – you know, one of those things men do when their girlfriends/wives are being annoying but trying to have fun.

Clearly, the squirrel was a hit with U.S. team, and took on the name of “Sammy,” courtesy of Steve Stricker‘s wife. Alas, Love released his friend back into his natural habitat after the Americans wrapped up a 3.5-2.5 lead through day one.

If Woods seem annoyed by the squirrel, it might be because the rascals have been known to disrupt a golfer or two with a few million bucks on the line. In fact, they’ve been known to halt many a sporting match, from golf to baseball to tennis to football.

Here are some of the best:

OK, so that last video isn’t a squirrel disrupting a sports moment, but maybe the best squirrel video ever.