A Better Way To Putt? 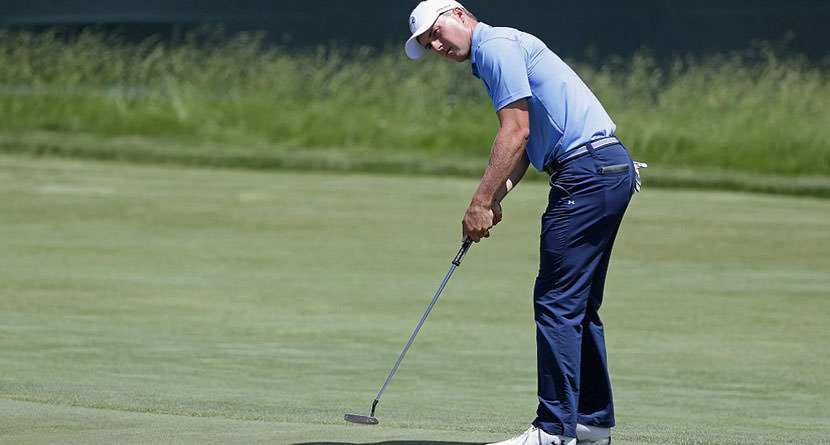 Putting accounts for nearly half of the shots you take on a golf course, so it, of course, makes sense to try out different ways to improve that portion of your game. Researchers at St. Francis Xavier University in Nova Scotia released a study recently that says the majority of golfers are putting incorrectly.

Ironically, one of the best putters in the world, Jordan Spieth, has been employing the study’s preferred style for years and it’s been looked at as little more than a quirk. Now, the numbers back it up.

Golfers who keep their eyes focused on where they want the ball to go have a higher chance of sinking a putt, Nova Scotia researchers have found. A team based at St. Francis Xavier University observed that, contrary to common practice, golfers who looked up instead of down while putting were more successful.

Human kinetics professor Sasho MacKenzie and his student Neil MacInnis recently published their findings in the International Journal of Golf Science. MacInnis said they applied a convention used in basketball or hockey.

“You’re usually looking at a far target when you’re throwing your free throw or taking a shot on net, so what we think is why wouldn’t we do that for golf?”

They held sessions over four days with 28 experienced golfers who tested the hypothesis with breaking putts — shots where the green slopes and golfers don’t aim directly for the hole.

Forty percent of the putts where golfers looked at the target line went in the hole — three percent more than when they kept their eyes on the ball. To put that in perspective, MacInnis said golfers typically make 33 putting strokes a round.

“It doesn’t sound like it’s a big difference but if you think about it in golf terms … you’re going to save one stroke a round and that’s actually very meaningful for golfers,” he said.

MacKenzie operates a golf biomechanics lab in an inconspicuous former municipal building in Antigonish, N.S. His research focuses on the optimal way for golfers to swing their clubs and how to customize equipment for individual players.

“I think Antigonish right now is the largest population of heads-up golfers probably in the world,” he said with a laugh.

Golf is a traditional game and players are often reluctant to try new things, especially given that it’s hard to quantify if a new technique actually helps, he said.

“Most are very dismissive, but by the end of the study when we show them, ‘Look, you actually putted better looking at the far target,’ … many of them will convert,” MacKenzie said.

MacKenzie often presents his findings to golf instructors at conferences across the United States and said golfers like Jordan Spieth, who was already using the heads-up technique on the PGA tour, drew attention to it while the research was happening and made people “more receptive” to his findings.

MacInnis is now doing graduate work with the Ice Hockey Research Group at McGill University, but he said his golf game performance has “increased dramatically” since adopting the heads-up technique himself.

He hopes the study may have filled some gaps in an under-studied area and he said it would be interesting to look at how golfers using the technique would perform over several years. Part of the appeal of the research, he said, is its practicality.