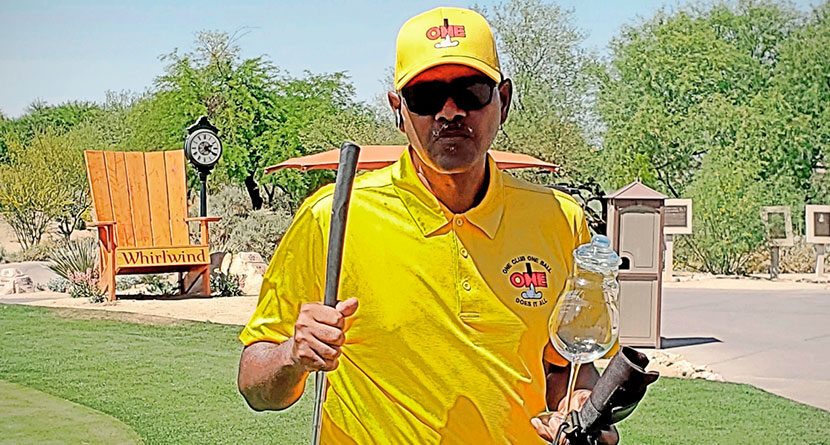 Maybe you’ve played in a one-club event or a three-club event, and sure, while it was fun, you were probably pretty happy to return to your full complement of equipment the next time out.

That wasn’t the case for Anthony Griggs, a 60-year-old golfer from Arizona who became so bored with the game that a friend suggested he try to challenge himself by playing with only one club, according to Golfweek.com.

An Army veteran originally from Gary, Indiana, Griggs moved to the Southwest in the early 2000s and became proficient enough of a player that he competed in a Waste Management Phoenix Open Pre-Qualifier — the event that gets players into the Monday qualifier, which offers spots into the PGA Tour event — as well as the 2018 Kadima Ventures Pro-Am.

Clearly a proficient player with 14 clubs, Griggs’ apathy towards the game grew until an acquaintance recommend that if he were so bored, he should try playing the game with only a putter.

And wouldn’t you know it, Griggs became pretty proficient with that one club as well. A few range sessions and a busted Scotty Cameron putter later, Griggs figured out how to play with the flat-faced club.

He picked up a replacement for his Cameron at a nearby Goodwill, purchasing an old Wilson Staff putter for $2.99.

Competing in the D Flight of the Devil’s Claw Championship, a Golfweek Amateur Tour event earlier this month at Whirlwind Golf Club at Wild Horse Pass in Chandler, Arizona, Griggs shot a round of 84 to win his flight by six shots. His flight was made up of handicappers 19 and above.

His prize for winning was a trophy, 450 points and a promotion to the B flight in his next event.

As the shirt he’s wearing in his victory picture, “one club, one ball, does it all.”