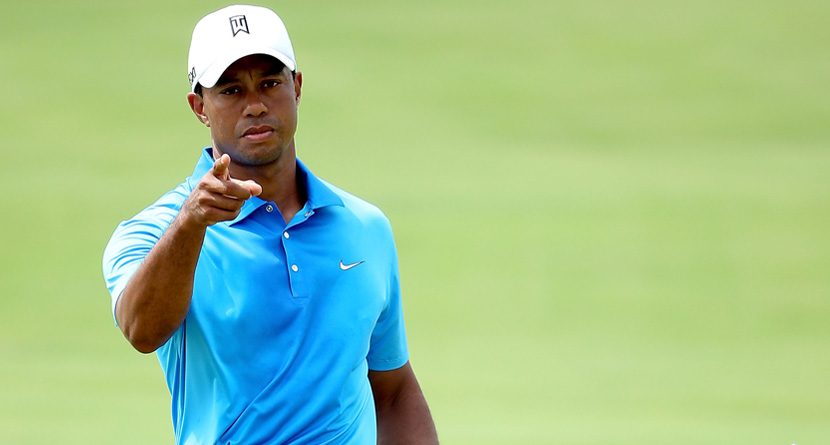 Earlier this week, Golf Channel analyst Brandel Chamblee, who’s also a contributing writer for Golf.com, came out with his year-end report card of professional golfers — and it’s no surprise to anyone that he gave Tiger Woods a big, red “F.”

Related Video: Brandel Chamblee, Why Do You Hate Tiger Woods?

Chamblee’s had a hard-on for Tiger since that Thanksgiving Day in 2009 when we all found out that Tiger Woods was a real human being with real human being flaws. That was the day Chamblee put on his double-pleated khakis and Peter Millar sweater vest, looked in the mirror, and decided that this was his chance to be different. That Brandel Chamblee would be the lone, brave soldier on the Golf Channel to stand up and say “You know what? This Tiger Woods guy — I’m not a big fan,” at a time when four of his top sponsors dropped him, editorial media harangued him, and 98 percent of divorced women wanted him dead. Way to blaze a trail.

Ever since then, Chamblee’s been the passive-aggressive voice of hatred for the world’s No. 1 golfer. In 2010, he wrote an essay for Golf Channel that went just short of calling Tiger Woods a steaming pile of shit:

“Woods’ off-course troubles and the issues they brought up are long since dead, but all dead things leave something behind: decomposing matter. The smell of that matter has replaced the awe.”

He’s even been quoted as saying that Tiger will never become the greatest golfer in history, even if he does top Jack Nicklaus’ record of 18 majors won. Why? He says Tiger hasn’t had to deal with stiff competition like Jack once did:

“The best players were in the ’50s, ’60s, and ’70s. They learned by mimicking and observing — not by looking at any video, not by reading a book, not by any math equation.”

Thank you, Chamblee, for setting the record straight for the young kid who spends hours on the golf course with his dad, who dresses up like Bubba Watson or Rickie Fowler for Halloween, and who wants nothing else in life but to become the greatest professional golfer who ever was.

Hang it up, Tommy, because it ain’t happening. As it turns out, you were born during an age of golf apps and range finders, so that means you’re always going to have it easy. But you sure look cute carrying that little plastic pink driver. Run along now. And tell mom to make me a sandwich.

And if being good really is about math, I have some numbers to pass your way:

The Tiger Woods Foundation has raised $75 million in its history to mentor hundreds of thousands of kids, get them to college, and give them an education.

Tiger’s 1997 and 2001 Masters wins brought in two of the three highest television ratings in golf history for the final round of a tournament. When Woods missed half the season because of a knee injury in 2008, ratings plummeted by 47 percent. Finally, in your report card, you should also factor in the millions and millions of young fans Tiger has attracted to the game, or the boost in tournament payouts he’s been credited with for fellow professionals (like yourself at one time).

For more than 10 years now, most everyone in the golf industry has suckled from the teat of Tiger, including yourself both as a professional and broadcaster, so excuse me if your report card seems a little skewed — likening Tiger’s performance this season to an anecdote about how you once cheated in grade school. Neat story, but unfortunately you’re not relevant enough for anyone to care what you were up to in the fourth grade. On the other hand, when you were cheating on your math tests, Tiger was breaking 80 and winning the World Junior Championship for the second time.

If you ask me — which you aren’t, but I don’t care — you are one of the reasons golf is still considered an exclusive, white, elitist sport for the 50-plus crowd. And this report card, along with your unfounded hatred of one of the most successful golfers in history, reinforces it.

I find it interesting that the only other “F” on your grade sheet went to the only other non-white professional golfer on your list: Hall of Famer Vijay Singh. But hey, high fives to Jason Dufner, who earned an “A++” on your list for having a hot wife. I tend to agree with that, but that’s not the point.

So Brandel Chamblee, as an up-and-coming broadcaster at a start-up golf lifestyle network, I might never achieve what your measure of success is in the golf industry (I’m young enough to have owned a computer in high school — ouch! Extra tick mark for not having grown up near a golf course). But your continued narrow-minded attack on an athlete who has brought an unprecedented level of relevance to the game, has given back to those the game has disenfranchised, and has earned a renewed interest of the game from young people earns an “F” in my report card.

Related Link: Tiger Is ‘Moving On’ From Cheating Accusation