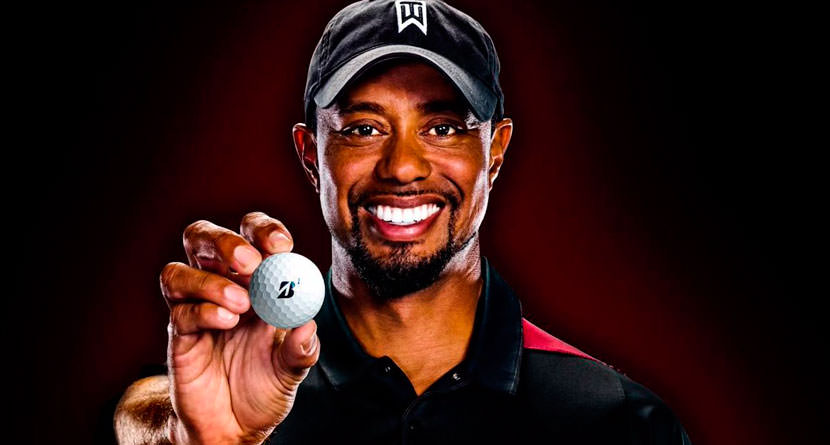 With only two official PGA Tour tournament rounds played — en route a missed cut at the 2017 Farmers Insurance Open — Tiger Woods’ return on investment has already been seen by the golf ball company he endorses, according to their CEO.

Speaking to Yahoo! Finance, Bridgestone Golf CEO Angel Ilagan was effusive in his praise of Woods saying that they’ve already seen the boost they were looking for when they signed him despite his lack of tournament reps.

It was almost a full year ago that Bridgestone Golf signed Tiger Woods to a long-term deal to play exclusively with Bridgestone’s balls.

Since then, Woods has only played in one golf tournament: the Farmers Insurance Open in January 2017, where he missed the cut. He’s been injured, and was arrested for driving under the influence.

But none of that mattered, says Bridgestone Golf CEO Angel Ilagan.

Woods will finally return to competitive golf at the Hero World Challenge tournament in December, but Ilagan (it’s pronounced “e-loggin”) says, “The payoff has already occurred for us. His endorsement value is what’s really important for us. He picked our ball as the best ball out there. This is just added gravy for us if he plays.”

It’s quite a claim, considering that Woods has not won a PGA Tour event since 2013.

Ilagan says that Woods is, “the only golfer in the history of golf that has actually had a positive financial impact” on the sport. Fans of golf greats like Arnold Palmer, Jack Nicklaus, Gary Player, or Greg Norman may dispute that. But certainly Woods’s impact on Nike is unquestioned: Nike first entered golf with a shoe in 1984, but Nike Golf truly took off when it signed Woods in 1996, then added balls in 1998, and clubs in 2002. On the other hand, Nike shut down its golf equipment business last year despite still having Woods as an endorser.

At a time when a once-hit sports brand like Under Armour is struggling (for four consecutive disappointing quarters) despite having an all-star roster of sponsored athletes, including the world’s No. 2 golfer Jordan Spieth, you might wonder if athlete endorsers just aren’t very useful anymore.

“I think that’s aways been true,” says Ilagan. “I don’t think the big-time athlete really has an impact—unless they transcend the game, such as Muhammad Ali, Michael Jordan. If they don’t transcend the game and they can’t reach out and become somebody that people listen to and believe in, it’s not something that makes any value. Their play alone is not sufficient enough to create financial gains for an equipment company or sports company.” Woods, Ilagan suggests, transcends golf.