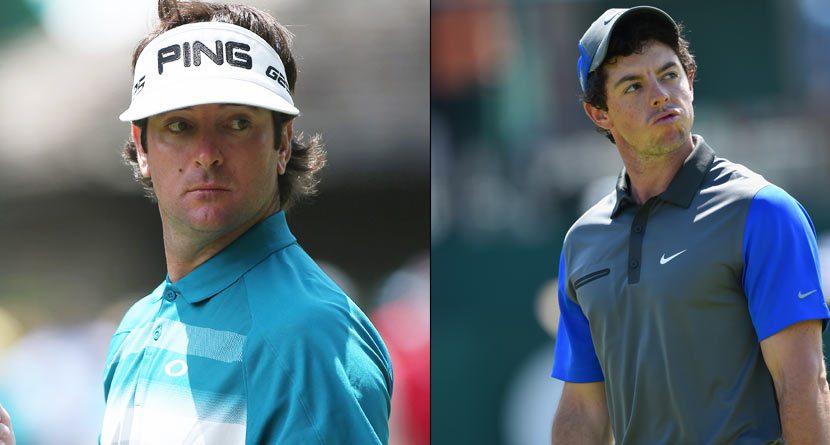 The Beatles are accepted as one of the greatest, most iconic rock groups of all time. John Lennon, Paul McCartney, George Harrison and Ringo Starr — four names I used to think everyone on the planet old enough to form cognitive thought knew. Apparently, I was wrong.

The band to which most modern music can be traced back (sshhh, don’t argue with me!) is something that I thought was common knowledge. For these golfers, however, that is not the case:

My goodness. In the words of that snooty waiter in “Ferris Bueller’s Day Off,” “I weep for the future.”

Henrik Stenson and Lee Westwood are off the hook. They knew their stuff. Rory McIlroy, Justin Rose and Ian Poulter, however — those guys are from the U.K. You’ve got to know the Beatles right? They’re from Liverpool for crying out loud! For those three to not come up with, at minimum, “John, Paul, Ringo, and …” is the equivalent of a 30-something American saying, “Elvis who?”

For Poulter’s sake, I really hope that he could answer this question, and that the reason we don’t see him answering correctly is thanks to editing. I mean, he’s 38 years old. He grew up in England. His parents lived through the height of the Beatles and he was born just six years after “The White Album.” How did this not come up?

Apparently, Poulter was just “milking it for the cameras,” but he had me worried:

I got them, just took a min. Milked it for camera. @Dingbat1477: @IanJamesPoulter did you really not know the names of the Beatles?”

At least Rors got the “George” part right, even if he was confusing the fab four’s George Harrison with “Star Wars” creator George Lucas. Of all these guys, he has the best excuse, being just 25 years old.

On second look at this whole thing, perhaps I’m just some type of curmudgeon (ding, ding, ding!) before my time. I just thought the Beatles transcended a little more than they do. I guess I was wrong.