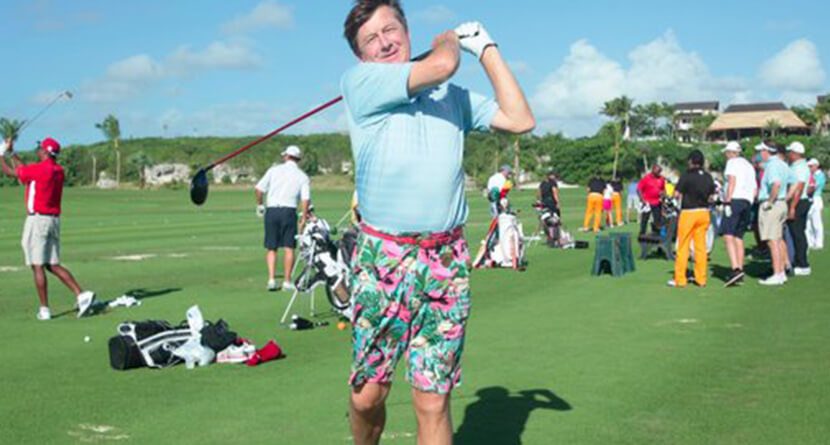 Most people know the NBA on TNT’s Craig Sager for his outlandish outfits and probing questions in between quarters to the basketball’s best coaches. However, what most don’t know is how much of a golf nut Sager is. Three guys from Oklahoma City found out just how golf-crazy the sideline reporter is this past week. Spencer Shanbour, the guy pictured on Sager’s right, said of the experience, “Craig Sager was by himself at this golf course in OKC and asked us to play with him! (It) happened Saturday, May 21, 2016. Coolest thing of my life. Strongest man in the world.”

What makes Sager’s energy, enthusiasm and 16-over par score of 86 that much more impressive is the fact that he has been battling acute myeloid leukemia since 2014. Sager’s journey was documented in a great Sports Illustrated cover story last month by Lee Jenkins.

Another perk to a Sager golf story is that we get to share this gem about Sager’s ability to throw a few back during the course of 18 holes.

Here’s an excerpt from a story in the Palm Beach Post as told by FOX Sports South’s Miami Heat reporter Jason Jackson:

“I don’t think he’ll be mad at me because this is awesome. During the Milwaukee series in 2013 we went and played golf north of Milwaukee, and one of his buddies from growing up came up from Chicago. It was them, myself and Telly Hughes, the courtside reporter for the Bucks.

“It was one of those days where it was windy and 60 degrees and you could’ve just called it off, especially after living in South Florida –‘Nah, this is a bad one. Let’s back off.’ And Craig was wearing shorts on this blustery, why-are-we-out-here day.

“Anyway, Craig Sager drank 26 Bud Lights in 18 holes and did not miss a putt. He two-putted maybe six greens, and everything else was in. We lost $70 each. It infuriated me. I don’t mind having a beverage after a round, right? But he kept having beers and I kept losing, and I thought, ‘I know this dude. This is a Midwestern man who has utter control of his constitution.’ There was no way.”