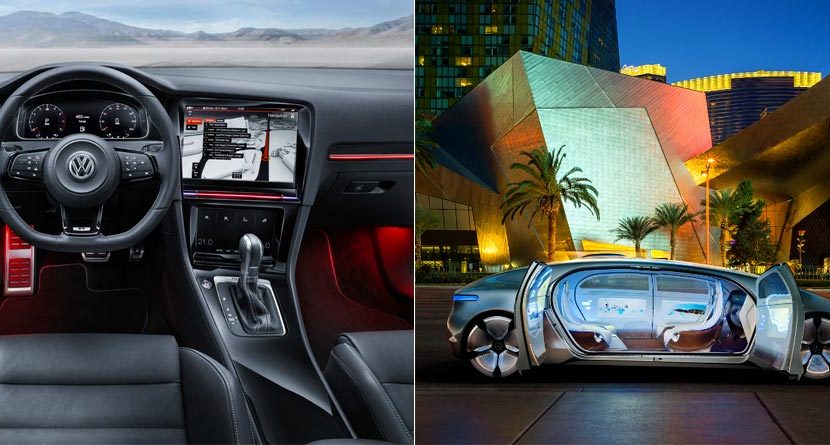 The Consumer Electronics Show, or better known as CES, is taking place in Las Vegas this week where all of the top tech companies will show off their “next big thing” to the world.

Everything from smart pacifiers to cars that park themselves with the touch of a watch have been introduced, with so much in between.

Keeping up with all the madness of CES is tough, but we’re here to bring you the best in the world of cars — mainly without drivers.

I still cannot seem to wrap my head around this one. BMW, makers of the “Ultimate Driving Machine,” may have just introduced the ultimate self-driving machine. The i3, one of BMW’s electric models, was put to the test of being virtually an un-crashable car.

What’s even better is how this thing handles parking.

The car is essentially its own valet service. Just get out, hit a button on your smartwatch, and it’ll drive itself down aisles to find the perfect spot. And when you’re done gallivanting around a mall or taking your date out to dinner, talk to your watch and tell your BMW to come pick you up.

The car will be waiting for you when you’re ready to go. Is that incredible, or what? Unfortunately, the technology is still a few years away from being put into production cars, but the future of driving looks mighty bright … and terrifying.

For people who don’t like fingerprints or smudges all over the interior of their vehicle, Volkswagen just introduced its holy grail. The VW Golf R Touch (an ironic name, I know) is the German manufacturer’s most technologically advanced car to date.

It features an infotainment system that will keep your friends’ greasy fingers off of the the touchscreen after downing a bucket of popcorn at the movies. Using gesture-based controls such as sliding your fingers in the air, users can adjust the many bells and whistles of the car.

The three large touchscreens can be customized with widgets such as the weather, displaying everything the driver could possibly need to stay completely distracted from the road. After watching this video, you’ll understand. It has to be seen to be believed.

No, it’s not a hover car, but it’s got the same look as one. Mercedes-Benz introduced its concept for the car of the future, the F 015 Luxury in Motion (*catches breath*). The interior looks like something you’d see in a UFO with twisting seats, LED lights, and interactive screens on the windows and doors.

On the outside, the front of the car projects a crosswalk onto the street, signaling to pedestrians when it’s safe to cross. Mercedes vows that this car will make the world a safer place to drive. With features like that, it’s easy to see why it’s saying that.

Not to mention, it drives itself.

For more on this incredibly futuristic ride, watch the video below.

Pioneer has made a big leap with regards to bringing your phone’s operating system to your car — old or new. The second generation NEX series head-units not only feature Apple’s CarPlay, but Android Auto, as well.