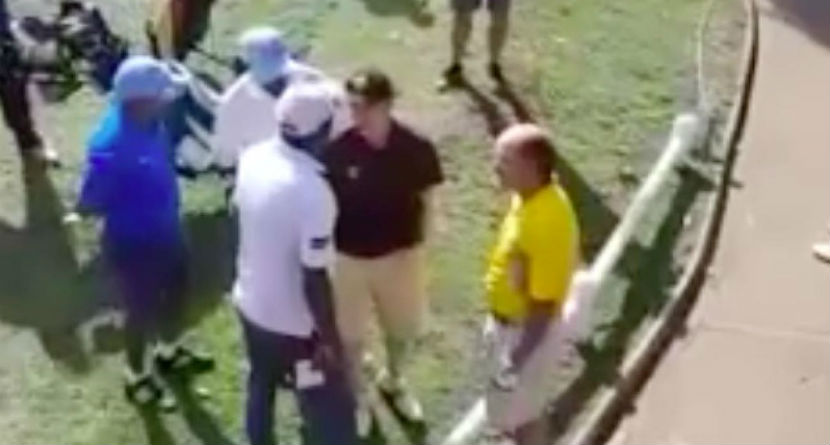 A wild scene broke out on a South African golf course earlier this week when tempers flared between two groups of golfers and punches were thrown. Women who witnessed the event caught the whole thing on camera from above.

It appears sexist and racist comments are what ignited the incident.

The Independent Online has the latest:

Details have emerged surrounding a fist fight between two groups of golfers that broke out at Durban’s Athlone Golf Club which was captured on video. The video which has been circulated on social media shows two groups of men punching and kicking each other after a verbal spat.

The woman, who filmed the incident, said the fight in the video occurred when a club official asked for the men’s names. The same group of men had allegedly sworn at a team of women earlier in the day.

“They saw us and began swearing at us. I told my group to gather their belongings and leave. As a group of lady golfers, all from different clubs, who meet once a month at various courses, in the 13 years of running the Pink Ladies Golf School, I have never been exposed nor been a part of this kind of behavior.

“The aggressive, sexist and racist comments made by the men are completely unacceptable and goes against every form of etiquette this fine game demands,” said the woman who filmed the fight.

Here’s the footage of the altercation (warning: explicit language):

A race war is a possibility in SA! pic.twitter.com/W2c6Mfw04H