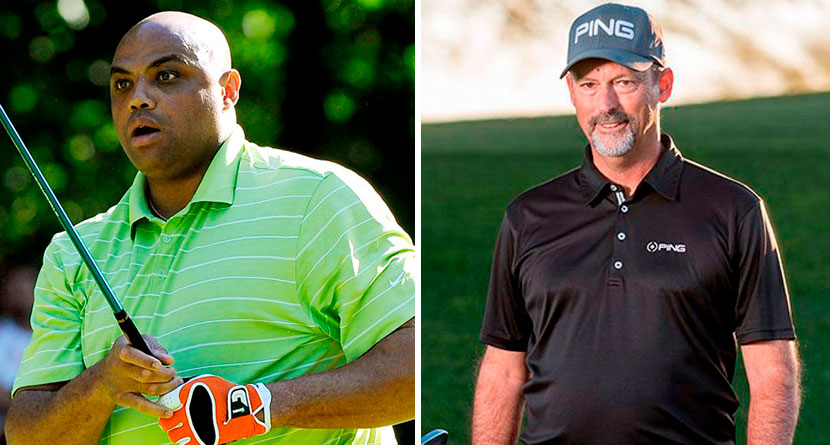 Charles Barkley’s unmistakable golf swing has been lampooned for so long — by the man himself and plenty of others — that the empathy normally reserved for such cringeworthy mechanics is pretty much nonexistent. And that’s only reinforced by self-deprecating TV spots and Chuck’s public persona, that of an unfiltered NBA analyst who dishes out as much punishment as he takes.

But think about it: if that was your buddy — hitching and hesitating and straining on swing after swing after swing, at times requiring a full reset before pulling the trigger — you probably wouldn’t be laughing. Certainly not in their presence. No, it’s more likely you’d want to put an arm around them and steer them toward a professional solution for such persistent swing demons.

But as Barkley points out in a recent interview with Golf.com, there’s such a thing as too much help. “The next thing I know, I got 10 voices in my head standing over a golf ball,” Barkley told Tim Reilly about the conflicting advice that contributed to turning a once respectable game into a punchline. “I went from breaking 80 to not being able to break 100.”

There is, however, one voice that’s gotten through the past couple years — SwingU Master Faculty member Stan Utley — and their work appears to be paying dividends.

Charles Barkley’s swing is one of golf’s feel-good stories of the year. Few have reached his level of low, and even fewer have climbed out of it.

Barkley credits @stanutley for getting him in the right direction, and Stan credits Barkley’s work ethic. https://t.co/PTupBQQyA1 pic.twitter.com/3oAJQyMKuD

Barkley made some surprising contributions in his victorious debut as a competitor in the third iteration of The Match last November alongside Phil Mickelson, with whom he’ll share the broadcast booth when Bryson DeChambeau and Brooks Koepka square off the day after Thanksgiving. But the above represents the smoothest footage of a Barkley swing in decades.

So what was the key change? According to Utley, Barkley’s hesitation to finish a swing was the result of an impulse to prolong the period of lag prior to impact. “When you don’t let any of that angle out, the clubhead’s never going to get to the ground,” Utley said. “When you don’t let the wrist out, you can’t reach the ground, so you dive for it.”

Armed with an uncomplicated swing thought that’s easy for an avid fisherman like Barkley to grasp — cast the club — the Basketball Hall of Famer has effectively rebuilt his swing. This tip squares with some wisdom Utley shared in his latest SwingU instructional video, in which he demonstrates a mental technique designed to quell your nerves before a shot.

Just as your physical movements during a pre-shot routine help put you at ease, you can employ a simple thought pattern to further alleviate any anxiety you might feel standing over the ball. It’s as easy as repeating a word or phrase in your mind. Utley’s go-to is “see it, feel it, trust it.”

Appearing last Friday on the Dan Patrick Show, Barkley sounded like a player supremely confident in his transformation — and one with three decades’ worth of receipts.

“You ain’t got no chance of ever beating me again,” Barkley boasted. “I’ll come to your house. You ain’t never gonna beat me in golf again. Never ever. … I’m back now, brother. I’m back with a vengeance.”

Patrick was understandably amused, which only emboldened Barkley, who claims to have reduced his handicap from a 25 when he partnered with Mickelson to a 10.

“When I was crappy on the golf course, y’all trashed me for 30 years,” Barkley said. “I got my superpowers back. I’ll play anybody, anytime, anywhere.”

Get Stan Utley’s teachings in the palm of your hand with the Stan Utley Golf app.