Check Please: Chad Johnson & The Most Memorable Tips From Athletes 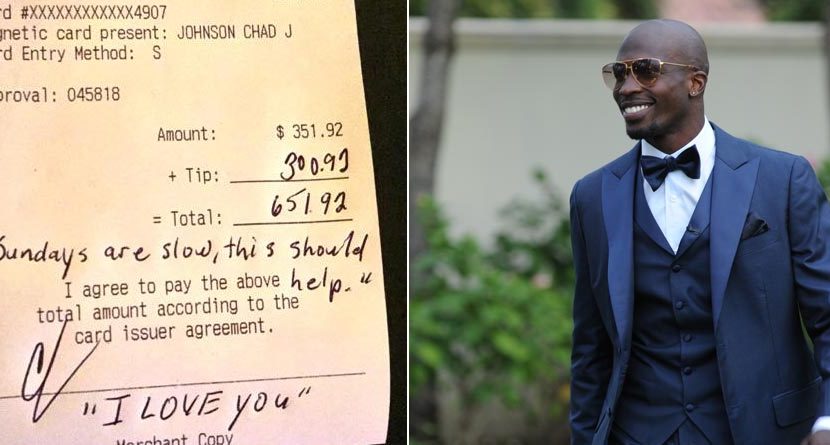 Stories of athletes or celebrities leaving massive tips never get old. Maybe it’s just me, but I love hearing about a guy leaving a $1,000 tip on a bill that came to less than the gratuity itself.

Unfortunately, Johnson miscalculated and performed some incorrect addition on the bill, but that’s beside the point.

The tip is in the message not the money… pic.twitter.com/Nh4EWYicsU

After seeing Johnson’s gracious gesture (and fantastic signature), we thought about some of our favorite ridiculous tipping stories — both good and bad.

Here’s what we came up with:

LeSean McCoy made headlines for his not-so-generous tipping when he left a $0.20 tip on a $60 bill at PYT, home of “America’s Craaaziest Burgers.” Clearly McCoy’s burger wasn’t craaazy enough.

What’s not to love about Charles Barkley. Sure, his golf game could use some improvement, but he’s one of the nicest and funniest guys on the planet. If you’re still not sold on Sir Charles, how’s this for a story … or two? Barkley apparently picked up the tab for a busboy’s tuition, saying “He’s a nice kid. He was working with kids, I loved that he wanted to be a teacher, and I wanted to help him.”

While that story’s ridiculous, especially in our age of college being so outrageously expensive, Barkley may have outdone himself on this one. He shared the story of a time when he tipped a blackjack dealer $25,000. The best part? He said he should have tipped him more.

“The more successful you are, the more you should tip, I truly believe that,” Barkley said. “I never went overboard. I tipped $25,000 before. I won about $700,000 at a blackjack. You have to tip. I probably should have tipped more to be honest with you.”

This is the ultimate bittersweet story. Peyton Manning was just trying to be a good guy by leaving a very generous tip of $200 on a $739 bill, which already included an 18-percent gratuity. The total tip came to be nearly 50 percent of the bill, which is absurd.

Here’s the bad part: the waiter got fired. All the kid wanted to do was share the epic tip with his friends, but his mean boss would have none of it. He may have lost his job, but he gained one hell of a story to tell.

It’s not often that you see someone leave a tip that’s larger than the bill, itself. Most people leave 15-20 percent and go on their way. David Beckham is not “most people.”

Beckham once left a $1,000 tip on a $100 bill, just because. These are the things you can do when you make as much as guys like David Beckham. This one might not fall under the category of tipping waiters or waitresses, but it’s still a great story. Wes Welker cashed in for $50,000 at the Kentucky Derby (even though he was overpaid by $15,000), so rather than going out and buying a new BMW, he handed out hundreds to complete strangers.

LeBron James will go down as one of the best basketball players of all time one day, but this story makes him sound like he won’t leave the same legacy as a tipper. James reportedly left a $10 tip on a $800 bill at a Cleveland steak house after keeping the restaurant open until 4 a.m.

Being one of the wealthiest athletes on the planet, it’s surprising to hear. He’s likely redeemed himself after everything he’s done for the community and city of Cleveland, though.

Phil Mickelson isn’t just handy with his wedges and flop shots. He’s pretty good at handing out money, too. He’s been known to tip extremely well while on tour, helping out folks every way he can. My favorite story, however, is how he purchases his lemonade.

Lefty doesn’t use change to pay for 50-cent cups of lemonade. He uses bills. Big bills. Mickelson supposedly buys lemonade from stands using $100 bills, telling the kids to keep the change. How’s that for an 8-year-old payday?