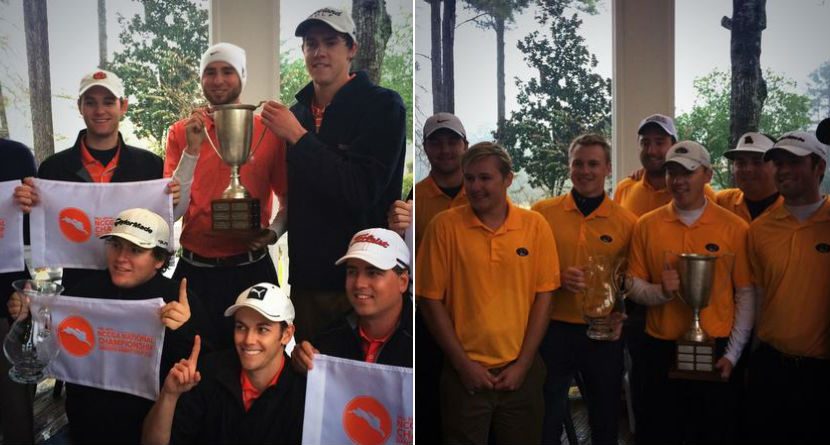 Each year, golf fans hear and see plenty of coverage of the game’s best collegiate players.

Teams from schools like Stanford, Oklahoma State, UCLA and Florida State are commonplace in sports pages while the top individual talents get their names discussed thanks to PGA Tour event exemptions, USGA events and, of course, the now nationally-televised NCAA Championship.

For one weekend, at least, the headlines were about this subsection of players thanks to the National Collegiate Club Golfers Association Fall National Championship.

Put on by NextGenGolf and held at the beautiful Dancing Rabbit Golf Club in Philadelphia, Miss., the NCCGA Fall National Championship was comprised of 28 club teams and another 18 individuals competing throughout the two-day, 36-hole event.

“The NCCGA National Championship is the premier event students, parents, our partners and our staff look forward to each fall and spring,” said Kris Hart, CEO and co-founder of NextGenGolf. “It’s really special to see 240 gentleman and ladies coming all the way to Mississippi this fall.

“Many of these students are coming out on their own dime for the love of the game.”

Knowing that, NextGenGolf and the NCCGA put on a show for the golfers.

The festivities kicked off Friday with practice rounds and a demo day put on by Cleveland/Srixon Golf, one of the event’s national sponsors.

Thank you to @ClevelandGolf and @SrixonGolf for all your support at the 2014 Fall National Championship. pic.twitter.com/bzM6RBMhv9

And, of course, Back9Network was on site to cover the event.

It was great having @Back9Network covering our Championship this weekend! Thanks for the support #Back9Nation pic.twitter.com/mQs1f7lWE1

The event was cut short due to rainy weather but it didn’t dampen the experience for co-champions Clemson and Missouri.

Clemson posted a team score of 10-over on Day 1 at Dancing Rabbit’s Oaks Course thanks in large part to Corey Stamper’s 5-under 67. Missouri withstood tough playing conditions on the event’s final day to post the best score on the resort’s Azaleas Course. Mark Stahlhuth led the Tigers with a 2-over 74.

For his stellar play, Stamper earned the event’s individual title. The win gets him an exemption into the Southeastern Amateur next summer.

Congratulations to our medalist, Corey Samper of @clemsonclubgolf! Corey posted a 5-under-par 67 to claim medalist honors and punch his ticket to the 2015 Southeastern Amateur Championship! #RoadToRabbit #JourneyToBetter #ClubGolf #NCCGAChamp

“This championship clearly shows the commitment younger millennials have in golf and is the anchor to helping keep the college-aged player on the course,” Hart said.