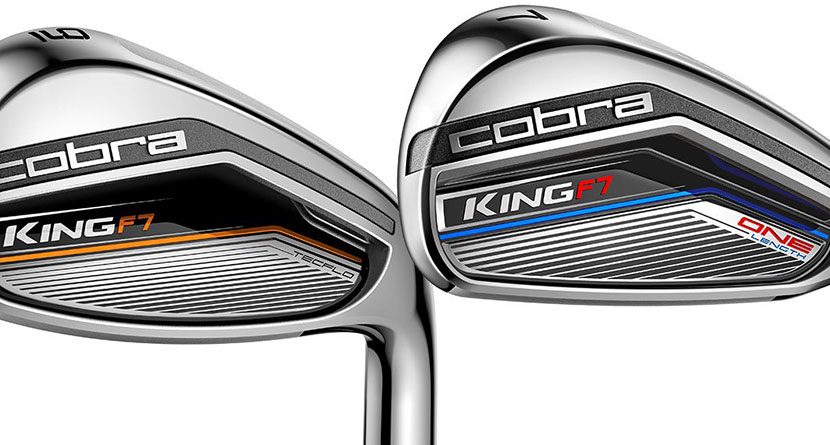 The world of golf equipment seems to out-do itself on a daily basis, and Cobra’s newest irons are taking that thinking to a whole new level. The equipment OEM announced on Tuesday the upcoming release of their new King F7 irons, a game-improvement club that aims to bring “more consistency and simplicity to the game.”

In addition to making their normal F7s, Cobra is releasing a set of irons that are all the same length, similar to that of recent U.S. Amateur champion and Cobra staffer Bryson DeChambeau.

Here’s what Cobra’s release had to say, via The Golf Wire.

The new King F7 set of irons, along with Cobra’s first-ever F7 One Length set provides golfers with optimized performance, distance, forgiveness and control of every shot.

The 2017 King irons offering is headlined by the King F7, which builds upon the popular King F6 model that introduced the ultimate progressive set to the market. The King F7 irons incorporate Cobra’s patented TECFLOTM technology to deliver a set that utilizes advanced cavity construction to optimize the performance characteristics of each iron. A new PWRSHELLTM face introduces a thinner face and sole structure that increases the Sweet Zone and delivers distance, precision and forgiveness. TECHFLO along with a new Thin, Optimized and Personalized (T.O.P) polymer medallion badge that is lighter than steel, allows the CG to be moved lower to create even more distance and forgiveness. Additionally, CNC milling improves groove structures in these irons to deliver maximum spin and trajectory control throughout the set. Using our proven Progressive Spin Technology we’ve combined progressive grooves and CNC milling to deliver maximum spin for each iron type.

A full hollow design with PWRSHELL face insert in the long irons (3-5) delivers low CG with an extremely responsive face for easier to hit, high-flying long irons. In the mid irons (6-7), a half hollow design combined with PWRSHELL technology delivers optimal CG for more precise, easy-to-hit clubs, meaning more greens-in-regulation. The scoring irons (8-PW) utilize a traditional cavity back design with wedge spaced grooves for added spin and more control to attack the pins. Finishing out the King F7 set is a specialty wedge design that provides added versatility and enhanced shot control greenside in the sand and gap wedges.