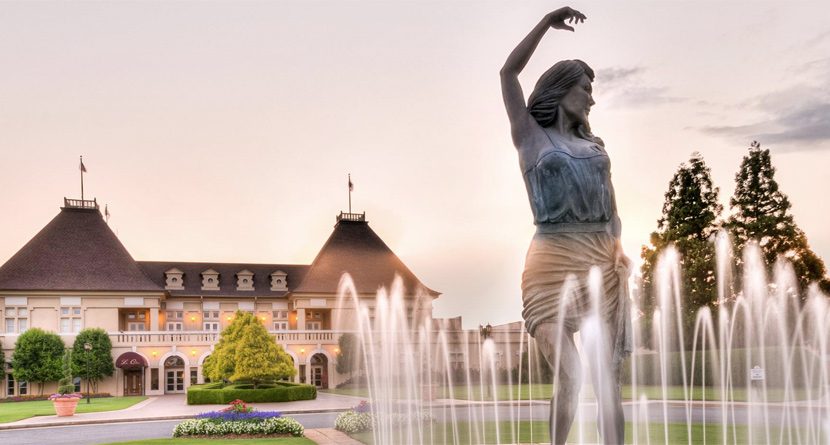 There aren’t too many settings in which you can sip a glass of wine made by an award winning Italian wine maker with a professional bull rider or an 8-time world billiard champion surrounded by Grammy Award-winning artists.  Did I mention that this took place at a French chateau in the hills of Georgia?  Oh yeah, and there were PGA Tour players there too including Boo Weekley and Billy Horschel who had both just competed in the Tour Championship. The second annual Colt Ford & Friends Celebrity Golf Classic held at Chateau Elan outside Atlanta brought together golfers, athletes, celebrities and of course some of the icons of country music.  The event was held the Monday after the Tour Championship on a gorgeous afternoon with a portion of the proceeds benefiting the St. Jude Children’s Hospital.

If you are a fan of Colt Ford’s music then you know that he is the innovative country rap artist who has collaborated with Jason Aldeen and many others to create a new sound in country music.  What you probably don’t know is that in a former life his name was Jason Brown, a successful collegiate and mini-tour golfer who left an impression on all those he came in contact with.  He was PGA Tour player Blake Adams’ teacher when Blake was a kid.  In 2008 Colt Ford was born to the world with the release of his first album Ride Through the Country.

As his star began to rise in Nashville, Colt always still kept one eye on the world of golf.  With a little convincing Colt’s manager, President of Average Joe Entertainment Rusty Harman, suggested a couple of years ago that they put on a charity event.  Rusty was the manager for Hootie and the Blowfish and was instrumental in the creation of the Monday After the Masters Pro-Am which has become one of the year’s great parties.  The efforts of Rusty, his staff and the folks at Chateau Elan cannot be overstated here.

This year’s event included a reception party with silent auction on Sunday night (I almost bought a signed guitar), the celebrity pro-am on Monday morning with a concert of stars in the evening.   Nearly every group had a PGA Tour player and a celebrity.  (I say nearly because I technically counted as a tour player).  The celebrity in my group was none other than Charles Kelley, lead male vocalist for Lady Antebellum.  Charles is the younger brother of singer songwriter Josh Kelley who went to University of Mississippi on a golf scholarship.  Charles said that when they were kids in Augusta they, “played music and golf and not always in that order.”  Not all the celebrity players are quite as accomplished players as the Kelley brothers

Seeing Jamey Johnson and Larry the Cable Guy on the driving range hitting balls next to CEOs and PGA Tour players is a sight to behold.  No, Larry’s shirt did not have sleeves.  Toss in Chipper Jones belting one 330 yards in the celebrity long drive contest and you have a collection of humanity unlike any assembled anywhere.

The highlight of the event was, of course, the all star concert on Monday night.  Larry the Cable Guy opened things up by saying, “welcome to the 8th Colt Ford and Friends Celebrity golf tournament and the first one that Colt has ever played in as a celebrity.”  The star of the Blue Collar Comedy Tour set an already anxious crowd in motion.  Colt then introduced Jamey Johnson who did a couple of songs including, “Seen It In Color” which brought the house down.  From Jamey to Sister Hazel and Laura Bell Bundy to Colt Ford the show ran for nearly two hours to an appreciative and well-lubricated audience.  The Kelley brothers sang together and the LoCash Cowboys debuted a new song. For me the highlight of the day came between golf and the concert when I got the opportunity to host Maginnes on Tap from the lobby of the Chateau Elan Hotel following golf and before the concert.   After golf I walked into the lobby of the hotel and was greeted by Henk Evers, CEO of Chateau Elan.  I introduced myself and said that I had a question.  His response was, “the answer is yes, now what’s the question.”  As I was setting up he sent over Simone Bergese, Chateau Elan’s Italian Wine Maker who left glasses and a couple of surprisingly good bottles of wine for my guests to try.

The show included PGA Tour players like Boo Weekley, Billy Horschel, William McGirt and Blake Adams.  William had played that day with Sean Willingham a 32-year-old professional bull rider with 14 years of experience.  I had never really spent any time with a bull rider.  I have to admit that he looked perfectly normal until he started talking about getting on a bull.  There is no question that he is the craziest person that I’ve ever had on the show.  But he did agree with me that the wine was excellent.

Also on the show was Billiard Congress of America Hall of Fame member Loree Jon Jones an 8-time World Champion.  She told us that her father built a wooden ledge along the pool table when she was a kid so that she could reach the table.  It worked and she was very cool. Colt Ford stopped by and spent some time on the air with his former student Blake Adams.  Some of the best moments on radio are when the host is a fly on the wall.

Sean McDonough, no not that one, the CEO of Roswell Food Group brought by a sample of Jeff Foxworthy’s Grit Chips.  I don’t think Jeff ever thought they would be paired with a nice red wine but it is a fantastic combination.  As a matter of fact the entire unlikely pairing and grouping of folks that were at the Colt Ford and Friends Charity Golf Classic were a fascinating combination.

The truth is that charity golf tournaments raise billions of dollars every year in the U.S. for charity and every one of them should be recognized for their efforts.  As a former player and radio host I get invited to quite a few throughout the year and would play in them all if I had the time.  I can assure you of one thing… if they will have me back next year I will be Chateau Elan ready to “get my redneck on Chateau-Elan style with Colt Ford!” Ok. We need to work on that last line.  Colt Ford and Chateau Elan style??? Nope still doesn’t work.

Maybe it’s just this… Colt Ford and all of his friends, whether Grammy winners, CEOs, bull riders or PGA Tour players, all just think of themselves as Average Joes… and that is why it all works.