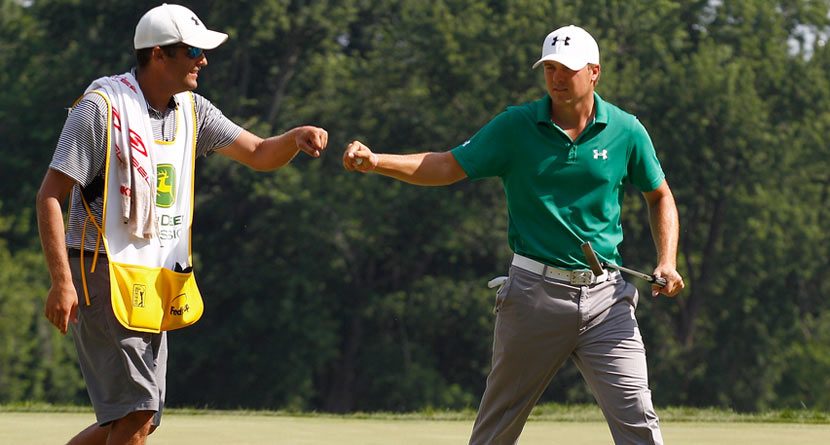 Phil Mickelson has it but knows what it is like to live without it.  Rory had more than most and then lost it and is searching.  Tiger Woods had more than any other player in history at one point in time and still has an abundance, but it hasn’t showed up at the game’s biggest moments lately.  Clearly they all have tremendous talent, but what fills the chasm between good and great is confidence.

I’m no sports psychologist, but I have spent more than my fair share of time at driving ranges, locker rooms and 19th holes where players of all levels search for it and few ever truly attain it.  My personal favorite definition of confidence is “the state of feeling certain about the truth of something.” There are two words in that definition that prove “confidence” is impossible to sustain in golf.  The first is the word “certain”.  (See the famous quote about taxes and death.)  The other word that ruins this definition as it relates to golf at the highest level is “truth”.  The truth is that every player in golf approaches the game differently and thusly the only truth about golf is that it has no truth.   The only certainty about confidence in golf is that it’s a constantly moving target.

While I don’t have a clear definition of confidence, I can tell you anecdotally what passes for it in golf.  A confident player is repeatedly trying to accomplish a series of specific and ever-changing tasks in the absence of fear or doubt.   Sounds pretty good doesn’t it.  You know, that feeling of pulling off that five iron beautifully, right at the flag without ever seeing the bunker, water or your opponent’s ball.   If we are lucky we all get there for a swing or two in every round, but that isn’t confidence that is an aberration.  Trust me. When a player has put in the work and has the talent to ascend to the top of the game they have certainly achieved a higher level of confidence than most, but confidence is fragile and often fleeting.  David Duval famously said, “the most important thing that a player can do is protect their confidence.”   Who would know better than the former No. 1 player who fell to outside the top 800 in the world prior to the 2009 U.S. Open?

So what does all of this mean?  What it means is that at those times when you are standing in the closely mowed area left of a green trying to pitch from the run off and know that you are going to chunk it… you are not alone.  And when you pull out the putter and roll it up the slope because you know that you can’t get your wedge on it solidly its okay.  The best players in the world do the exact same thing… at least occasionally.

I cannot tell you what was going on in Phil’s mind when he told Bones on the first hole on Sunday at the Open Championship, “we got this”.  Very few can, and none of them are sports psychologists but I can write volumes about what it’s like to be at the opposite end of that spectrum at the highest level.

There is a theory that to become an expert at anything takes 10,000 hours.  I can also tell you that to hit 1,000 golf balls a day takes between 4 and 5 hours.  Short game and putting are not factored into that 1,000 balls.  Furthermore, I can tell you that if you aren’t doing that every day then you’re falling behind.  But expertise doesn’t breed confidence… at least not enough of it.

Here is a personal example.  In my 9 years on tour I was one of the straightest drivers of the golf ball on the planet and spent every year trying to get longer.  I was a decent ball striker but always wanted to hit it higher and spin it more.  I was a great putter but was always too streaky.  You get where I am going with this?  In retrospect I realize that while I was sure that I was doing the right things trying to get better, more often than not I was doing more harm than good.

I once had a very well-respected sports psychologist tell me that “confidence is a choice.”  Tell that to David Duval.   Confidence is the product of hard work and self-belief and quite possibly a heaping helping or two of delusion.

There is no other game that attacks any player’s confidence the way that golf does.  We all know that and it’s why we play and probably why the 19th hole became such a staple in the golf culture.  Knowing that should also remind us that the best players in the game are fallible and subject to the same emotions we are.  Beyond commitment and talent what separates them is their ability to bounce back and “find it” when they are “close”.  When you hear them saying things such as, “it’s close” or “I’m playing better than my scores,” what he’s really saying is that “physically I’m there but mentally there are still hurdles.”

Confidence is the final building block and the foundation for success in golf.  I am no architect but I’m pretty sure that’s a structural conundrum.

The mini-tours are filled with kids with as much talent as any player on tour.  You probably know one or two at your club.  The deciding factor on whether on not they make “the show” is confidence, however you define it.  Let’s steal a phrase from a misguided member of the Supreme Court and change one word… I don’t know how you define confidence but I know it when I see it.

Related Links: Many Tour Golfers Will Be Out Of Work Soon

Other Hot Links:
– Stars Who Have Bounced Back From Scandal
– GoPro Cameras Take Golf by Storm
– Summer of the Ace: 9 Best Holes-in-One