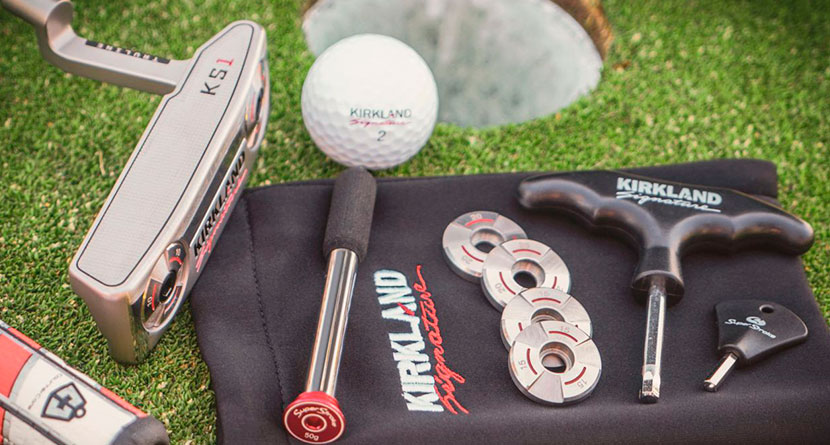 Costco’s foray into the golf industry has been slow, steady and disruptive.

And now the membership-only warehouse store is dipping its toe further into the golf waters with the release of the Kirkland Signature KS1 Putter, a forged and 100% CNC milled from premium 303 stainless steel.

Costco first made a big splash in the golf space in 2016 with the release of their Kirkland Signature Tour Performance four-piece golf ball. The hype around the ball went nuts following a favorable review from MyGolfSpy.com, which found that the K-Sig performed on par with the most popular golf ball on the market, the Titleist ProV1.

The balls sold out repeatedly, and obviously turned some heads in the golf equipment world, including drawing and bringing litigation against Titleist’s parent company, Acushnet, along the way. The ball has since been redesigned, and it is still available.

And the Costco putter hits the house. #golf tomorrow will be interesting. pic.twitter.com/YYHwvUZSoY

The company’s next move was to enter the club space, with rumors swirling about wedges and putters. As Farmer told GolfWRX.com, a golf-crazy board at Costco was happy to dive into the crowded space.

“The approach to creating the KS1 putter was no different than creating any other Kirkland Signature product – to work with a manufacturer to create something that offers exceptional value to our customers,” Farmer said.

According to Ryan Barath of GolfWRX.com, the putter was selected as the first club Costco would manufacture because of its relative simplicity and the fact that golfers love to tinker and test other putters moreso than other clubs in their bag.

From there, Costco approached “a well-respected manufacturer in China that also produces putters for a number of well-known OEMs” and went to work on the KS1’s design. The end product was not something you’d be surprised to see on the course or in the pro shop, which is by design.

The plumber-neck blade design harkens images of the PING Anser or the Scotty Cameron Newport 2, especially given the inclusion of removable and adjustable weights on the sole of the club. To that end, Farmer said the KS1 will have a weight kit sold separately for those who truly want to tinker with the specs.

“Research shows the majority of golfers don’t tinker with weights and settings of their clubs,” Farmer said. “So to offer the best value, we are making it available online.”

Putter and weight kit are sold separately. Putter will be available in June on https://t.co/B9J0qGp7Uw and at select warehouses. pic.twitter.com/b99HvqI3we

The putter, which measures 34.5 inches and has a head that weighs 340 grams, comes in right-hand only and features a headcover with plush lining. The first run of putters sold out online, but they have already been returned to the store website. Farmer said it is expected to be rolled out in 80 stores around the country as wel.

“This is a great club,” Farmer said in the May Issue of the Costco Connection magazine. “The steel and milling, plus the professionally milled insert, provide exceptional performance and feel.”