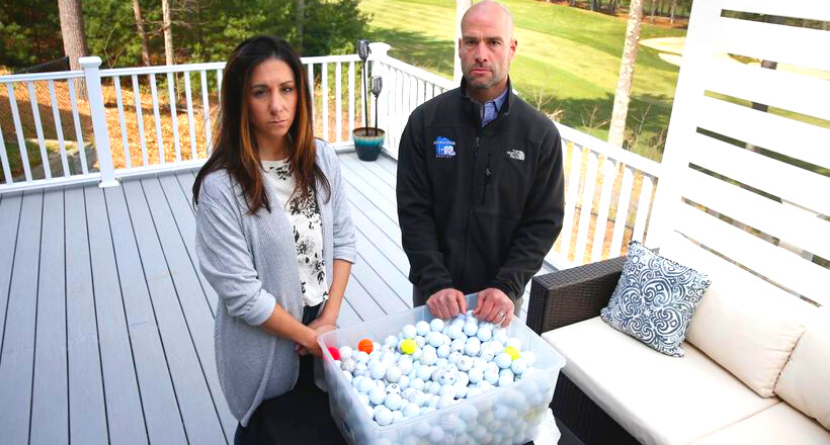 It happens to the best of us. And, of course, the worst. You hook a tee shot into a yard abutting the course you’re playing. And maybe the ball clanks off a roof or a deck or gives a pet a scare.

It’s always regrettable, but it’s also the cost of doing business — for both golfer and homeowner. But how much is too much?

A family in the Boston suburb of Kingston seems to have arrived at an answer and is due to make a small fortune for their troubles, per a harrowing Boston Globe report.

Back in 2017, Erik and Athina Tenczar moved their young family into a four-bedroom, 3,000-square-foot home overlooking the 15th fairway at Indian Pond Country Club and promptly came under the near-constant bombardment of errant golf balls.

The physical damage done to the house by upwards of 700 balls was one matter. But the emotional distress of never knowing when the next shot would shatter a window, crash into their deck or pelt the house’s siding exacted a more significant toll on the parents of three daughters under the age of 5.

A Superior Court judge and jury were inclined to agree, awarding the family $3.9 million ($5 million with interest) in their lawsuit against the club for “damages and mental and emotional suffering” at the conclusion of a six-day trial this past December.

“When it hits, it sounds like a gunshot,” Athina Tenczar said. “It’s very scary.”

The Globe’s story is loaded with colorful descriptions for occurrences that, again, might seem relatively normal to a golfer. “The siding on the house was peppered with circular dents, like a battleship in a war zone,” the story reads.

That’s not to dismiss or invalidate the Tenczar’s claims; but the case does raise the question of how much responsibility the club bears for the performance of its members and whether a homeowner more or less tacitly signs up for some wear and tear the second they occupy such a property.

“Should we have looked into chances our house would be hit? Probably. I don’t know,” Erik Tenczar said. “We just fell in love with the house. It was our first house.”

Reconfiguring the 15th tee has severely lessened the frequency with which off-target shots find the house, and the family has said it has no intention of moving. For its part, the club filed an appeal in March.

“I’m extremely confident that the injunction will be struck down,” said the club’s lawyer, John Flemming. “In my opinion, as a matter of law, the verdict of $3.5 million for alleged emotional distress is against the weight of the evidence.”