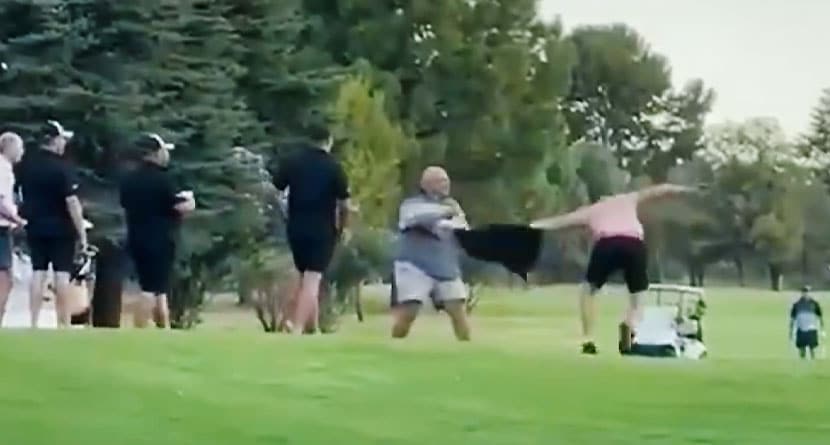 Golf can be an irrationally agitating game at times, but more often than not, that agitation is self-flagellating.

However, when you get out onto a crowded golf course and there are seemingly golfers everywhere, it’s not uncommon to get frustrated with fellow golfers.

Whether it be for pace of play, poor etiquette, some combination of the two or something completely unrelated, tempers can run high, as we’ve seen countless times before in all walks of life.

Two groups of golfers seemingly standing on a greenside tee box stood around as their two largest friends went at it with the loser of the first batch of punches heading over to the nearby green for a little bit of backup.

Nothing like a good old fashioned fight on the golf course. pic.twitter.com/7o1KPquag8

Beyond grabbing a flagstick and using it as a weapon, the second most interesting part of the video is just how concerned golfers are with their own games. Sitting in the fairway waiting to approach the green, the golfer at the 0:32 mark of the video had seen enough and began working on his preshot routine to hit a short approach into the green where the flagstick had just been removed.

The backstory makes the fight seem even sillier. According to News24.com, the brawl occurred at a primary school fundraiser in Vereeniging, South Africa. One of the men had lost his cell phone during the course of the round and had been looking for it ever since.

The other man in the fight had apparently hidden the found cell phone from the other, sparking the brawl.

“There were two groups, one behind the other, on the course. Someone in the first group lost their phone,” Maccauvlei Golf Club general manager Leon Kruger explained. “When they asked the second group if they had seen the phone, they denied having it. That’s when things got out of hand.

“This is disgusting behavior. A fight is not what you want to see on the golf course.”

Kruger said that the club is reaching out to the men involved to discuss the incident, but they’re not planning to ban fundraisers from the club as the beneficiaries would be the ones missing out.