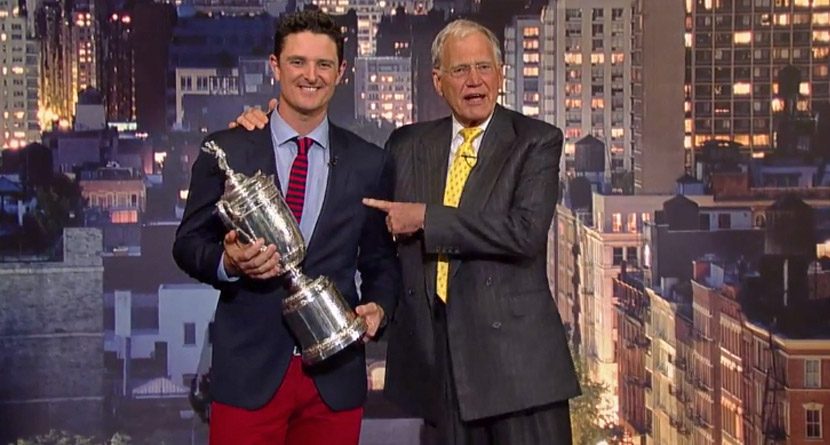 David Letterman shook up the late-night talk show genre when he announced his retirement during Thursday night’s broadcast of CBS’s “Late Show With David Letterman,” ending a 21-year run.

For more than 30 years, Letterman has entertained audiences with his trademark banter on trendy topics in pop culture, entertainment and even the game of golf. As the veteran talk show host begins the countdown to his final show sometime in 2015, here are 9 of Letterman’s funniest golf moments and interviews.

1. Fresh off winning the 2013 U.S. Open by two strokes, Justin Rose is on with Letterman to perform the always-entertaining Top Ten Countdown:

2. Letterman recalls a time in which he was talked into competing at the annual AT&T Pebble Beach National Pro-Am by his boss, CBS President Leslie Mooves, but it turns out he played much better than he expected:

5. Letterman shows how President Barack Obama really succeeds in a game of golf, especially when it comes to converting his putts:

6. Actor Bill Murray was Letterman’s first-ever guest back in 1982. Murray would go on to make several appearances on Letterman’s show over the years. In this clip from two years ago, the comedian tells Letterman about an awkward experience he had driving a golf cart in Stockholm:

8. Actor Hugh Grant tells Letterman why he would prefer to play golf without making jokes or having any fun:

9. Letterman does his Top Ten with some surprising facts about 2011 Masters champion Charl Schwartzel: