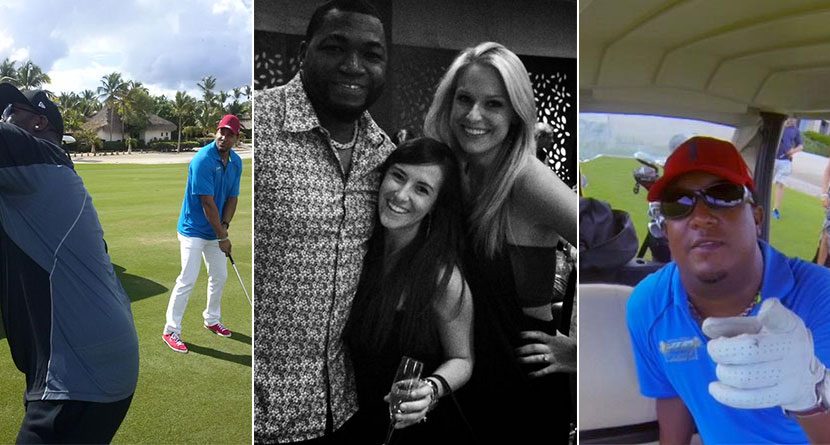 David Ortiz and Manny Ramirez were arguably the best one-two punch in baseball during their prime years with the Boston Red Sox. No one will doubt their talent at the plate, but their ability to hit a golf ball is a different story. Besides, why would two guys with more than 450 home runs each need to hit a golf ball?

At Big Papi’s annual David Ortiz Celebrity Golf Classic, both guys teed it up to benefit the David Ortiz Children’s Fund. But it wasn’t just the two of them … the always-funny Pedro Martinez and several other big names were in the field in Punta Cana, as well.

During what I would assume was a hilarious and fun-filled day, Ramirez apparently took his first ever golf swing. Here’s the evidence, courtesy of MLB.com:

His golf swing may not be as pretty as his baseball swing, but it does resemble it slightly. All in all, not a bad effort from Manny.

Here are some of the best moments from the event, in GIF form, of course.

There were also numerous photos shared on social media. Here are a few of our favorites:

First, let Big Papi take a selfie — with Manny trying to hit behind him:

And, of course, here’s Pedro goofing off on stage during the event’s charity auction:

With the number one pick in the #OrtizClassic draft, @45PedroMartinez! Thanks for your generous support EJ Whelan! pic.twitter.com/3TEnz9XFKX

And, here’s what looks like a trailer to a video on this year’s event:

A big thx for everyone who help me out this weekend at the #OrtizClassic to support the David Ortiz Children’s Fund!!! Gracias a todos que me ayudaron en el #OrtizClassic para apoyar mi Fondo Para la Niñez!!!