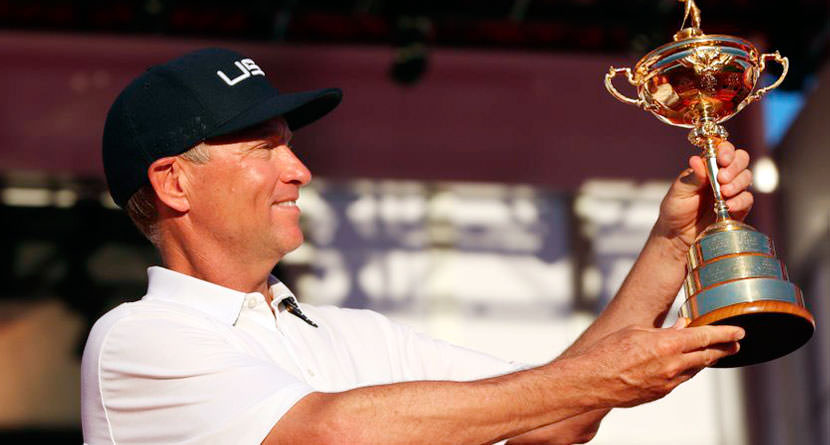 On a trip with his son Dru, DL3 had an awkward fall on the bunny hills that broke his collarbone in three places. Golf.com’s Michael Bamberger spoke to Love, who despite a change in plans won’t be sitting around bored.

Love, whose long career has had numerous interruptions over the past 15 years for various injuries and surgeries, broke his right collarbone in three places while snowboarding in Sun Valley, Idaho, earlier this week. He is now recuperating at home in Sea Island, Ga., when he thought he’d be getting his game in shape to play in next week’s Sony Open in Hawaii.

Love, an active outdoorsman who hunts and fishes all over the world and has been a serious snowboarder for years, doesn’t even have an adventurous story to tell about his latest mishap. “It was on the bunny slope,” he said. “That’s where these accidents happen.” It was just an awkward fall.

After a surgery to reset the bone—with a plate and eight screws—Love’s doctors told him that even though he had “a bad break” there was no reason to think he would have anything other than a “full recovery” provided, Love said, “I don’t fall again. So that’s my goal for the next six weeks. Don’t fall.”

In six to eight weeks, Love expects he will be able to hit balls again and hope to be playing tournament golf in April. In the meantime, he will check in often on his 89-year-old mother, Penta Love, who is making a good recovery from a 2015 stroke, and his two-year-old granddaughter, Eloise Charles. He is also looking to make some hires related to the RSM Classic, the November PGA Tour event Love hosts in Sea Island.

Love also is an active golf-course architect with various projects in the works. He has a particular interest in building six-hole courses that can be played by beginners or, a resorts and retreats, in a quick and more informal way than the conventional round of golf.