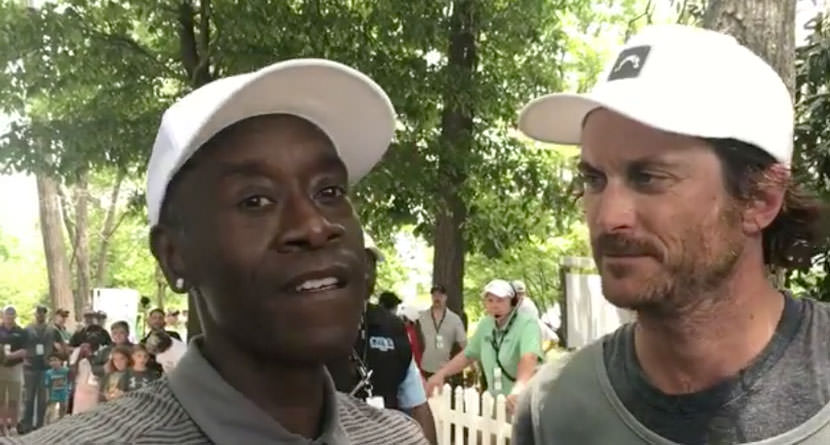 A player-caddie relationship is something that when it’s good, it can be really good, but when it’s bad, it can go south in a hurry.

During the final round of this year’s BMW Charity Pro-Am, the Web.com Tour’s take on the AT&T Pebble Beach Pro-Am, spectators at the Thornblade Club in Greer, South Carolina got to see first hand what a bad player-caddie relationship can look like in real time.

This wasn’t just any player-caddie relationship, either. Beings that the event is a pro-am, the player and caddie in question were movie and television stars Don Cheadle and Oliver Hudson. Cheadle, who is a pretty serious golfer that plays off of a 7-handicap, was invited to play in the event and Hudson offered to loop for his friend.


ESPN’s Michael Collins caught a whiff of a budding chasm the night before the final round in the hotel lobby.

So @doncheadle makes the cut @bmwcharityproam and @theoliverhudson was supposed to caddie but there was some serious drama between them in the lobby of the hotel tonight. Maybe they won’t be a pair Sunday.

Cheadle did not take kindly to having his conversation with Hudson put on social media and let Collins know.

Damn. Not trying to ruin a friendship. Will be out there as a fan cheering my boy on.

As it turned out, on Sunday of the tournament, Collins was on to something and was tipped off to a budding buddy feud by former Web.com Tour winner and PGA Tour member Kyle Thompson.

Collins found the pair out on the course and lo and behold, the meltdown was underway.

HUGE caddie no-no by @theoliverhudson backing @doncheadle off the tee shot. And they’re back to fighting again. #TryingToHelpCanHurt

If I don’t post anything again for a while, here’s why. #Busted #GottaOwnIt

Hudson took his fair share of criticism throughout the round, but every man has his breaking point and the star of “Splitting Up Together” had his on the fairway after a poor wedge led to an exchange of words and a rocketed headcover at Cheadle’s back.

Aw man… just when things looked better between @doncheadle and @theoliverhudson a bad wedge turned into something every pro caddie has dreamed of doing to his pro at one time or another. #FrustratedCaddie #PlayerGrindingTooHard

Collins stayed around to catch the ending, which he dubbed “all’s well that ends well” as Cheadle hit a great recovery shot from short of the 18th green only to lip out the par putt.

The pair embraced and seemed to bury that hatchet, although there appeared to be some below-the-surface fires still burning.

Almost a miracle par by @doncheadle on the 18th green. After the tap in bogey he and @theoliverhudson share a hug that seems to have more than just congrats in it. #TrueFriendshipIsLove

As with anything on the Internet nowadays, you have to be wary of fakes. As it turns out, the two actors were putting on show and Collins thought it would be entertaining to play the whole thing off as real — and if we’re being honest, they did a pretty good job of it.

Collins let the cat out of the bag with his description of the post-round interview.

Yeah… not making the cut @bmwcharityproam turned into the best day ever! Last night at dinner @theoliverhudson @doncheadle and me hatched this crazy idea. Hope y’all enjoyed the ride we took you on! #TryingToHelpCanHurt #WhatsMyNextProject

You can’t believe everything you see on the Internet.