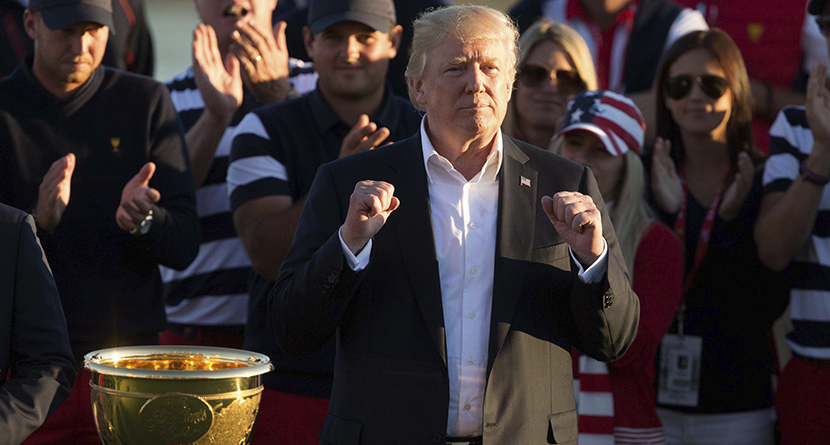 The Scots like their pop, and that has golfers at Donald Trump-owned Trump Turnberry up in arms at a ban on the country’s top-selling soft drink.

The course located in Scotland and owned and operated by the president’s organization has banned the nation’s top soft drink Irn-Bru, according to reports. Irn-Bru is the “Coca-Cola” of Scotland and is a bright fizzy orange drink.

Trump Turnberry is located in Ayrshire, Scotland and has undergone extensive upgrades in the last several years. The soda ban isn’t for political reasons or even marketing. It’s because the drink, when spilled, can permanently stain the carpets, according to the Ayrshire Post.

The club has spent over $271 million in upgrades including hundreds of thousands of dollars on new carpeting.

Turnberry GM Ralph Porciani told the Anyshire Post: “We can’t have it staining when to replace the ballroom carpet would be £500,000 ($678,800) alone.

“We have villas here with Irn-Bru stains in the carpets which I can’t let.”

Trump’s mother was Scottish born, but he has not endeared himself to her origin country. The ban has made waves across Scotland. The orange drink is sometimes known as Scotland’s other drink and the ban, of course in classic Trump fashion, has caused a mini international incident. The National newspaper The Scotsman called the ban an “unfortunate stain on Trump’s reputation.”

The row became a trending topic on Twitter in the United Kingdom.  If banning soda can get the Scots up in arms, let’s hope for the sake of the world, the Trump organization lays its hands off their scotch.