Donald Trump Hits Ace During Round With Ernie Els 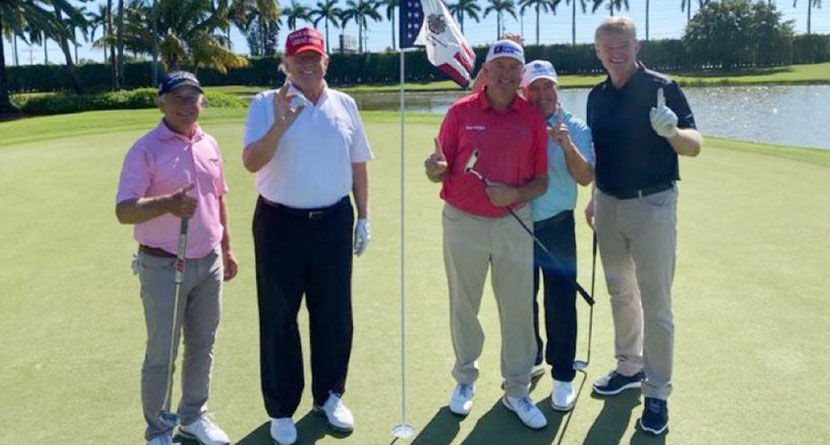 This past weekend, former President of the United States Donald Trump was photographed celebrating a hole-in-one alongside a few familiar faces: Ernie Els, Ken Duke, Gene Sauers and Mike Goodes.

Most golf fans will recognize Els, winner of 19 PGA Tour events, including four major championships, but the other three are all regulars on the PGA Tour Champions.

On the par-3 7th hole, Trump reported he struck a 5-iron, “which sailed magnificently into a rather strong wind, with approximately 5 feet of cut.” The ball bounced twice, hit the flagstick and dropped, according to Trump’s official confirmation statement.

Social media was abuzz following the initial reports from Tim Swain, the Republican running for Senate in South Carolina.

🚨TRUMP JUST MADE A HOLE-IN-ONE! pic.twitter.com/89lrgsGkjT

Trump’s office confirmed the ace with a statement and video.

After the round, Els and others congratulated the former president on his accomplishment.

Great shot on Saturday 45! Fun to watch the ball roll in for a hole-in-one.