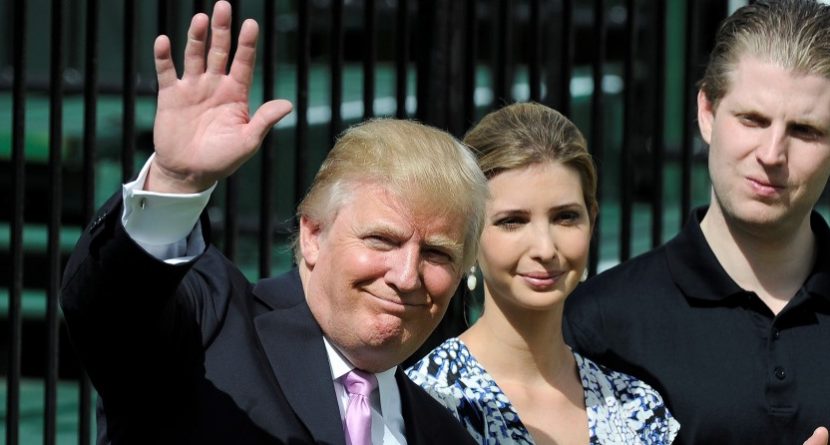 The Ryder Cup was established in 1927. It’s a biennial team competition pitting the United States against Europe. The course on which it’s played has always alternated between the two continents.

So naturally, Donald Trump wants to bring the storied event to Dubai.

The billionaire was in the Middle East on Monday to check on the progress of the Trump International Golf Club Dubai. As you would expect, much pomp and circumstance accompanied The Donald’s arrival, and Trump, as you would expect, proclaimed greatness for this project, which will reside in the middle of a 28-million-square-foot Akoya by DAMAC master development.

“This is an incredible venue for the Ryder Cup to be brought to,” Trump said. “I’m not saying we’re going to get the Ryder Cup, but I think we would have a great chance. Certainly the course is designed to the highest standards of golf. It’s as good as it gets in terms of shot making, in terms of everything, shot value in particular. I think we will have a good chance to get the Ryder Cup because they will be bringing it to this region at some point, in my opinion, in the not-too-distant future, and we will have the best course by far.”

“I would like to see (Trump International Dubai) go after it really strongly and I’ll help them, because as you know, Sandy Jones is a tremendous guy and he has been so nice with what we did in Scotland. He said it’s one of the greatest courses ever built, the one in Aberdeen (Trump International Golf Links). I have a lot of respect for Sandy Jones and Sandy Jones has a lot of say where the Ryder Cup is,” Trump said.

In the past month alone, Trump has purchased Turnberry Resort in Scotland, which has hosted four Open Championships, and the Trump National Golf Club in Bedminster, N.J., was awarded the 2022 PGA Championship.  But why stop at hosting majors? Trump wants the most prestigious international event in golf. Even if that means eschewing all historical sentiment and moving it some 7,000 miles from the U.S., where half of the Ryder Cup participants reside.

Trump landed in Dubai fresh off a visit to Turnberry.

“If it can’t be the best then I’m not interested. I’ve just left Turnberry, which is very old and has tremendous history and has held many great championships, and I was very lucky to get it. (Trump International Dubai) is very new, but I think in the end it’s going to be equally as great. We’ll make sure it is,” he said.

As for the Trump International Dubai golf course, it’s being designed by the world-renowned Gil Hanse, who recently revamped the Blue Monster at Trump National Doral Golf Club and is in charge of the 2016 Rio Olympic golf course. The Dubai track should be completely grassed by early 2015.

But it’s not a Trump property without luxury living, so surrounding the course will be the Trump Estates, an exclusive gated community with more than 100 villas and mansions. The entire project is expected to be completed by 2017.