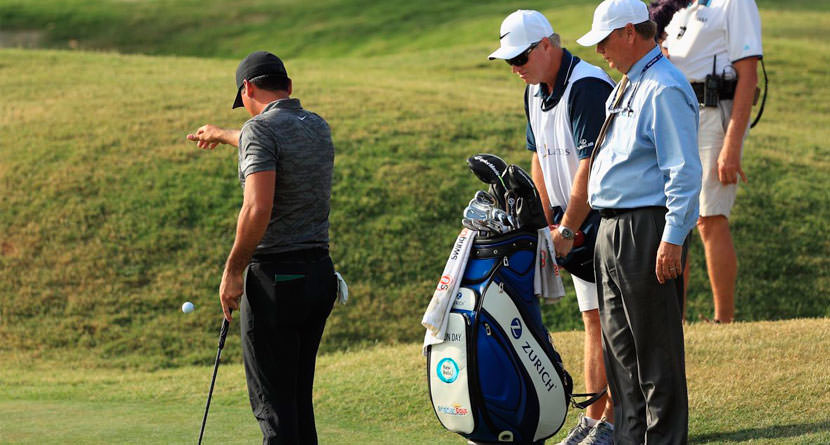 Apparently, April Fools’ Day began around 1582 when the Gregorian calendar replaced the Julian calendar. Back then, those who forgot that there was a new calendar and attempted to celebrate New Year’s (formerly celebrated on April 1st) on the wrong day were teased as “April fools.” Nowadays, we recognize April 1st as the day reserved for playing practical jokes on others. A classic April Fools prank on the golf course is tricking a friend into teeing up an exploding golf ball.

Pranks on the golf course aside, it is foolish for someone to even think about playing a competitive round golf without knowing the Rules. As noted in Rule 6-1 [Rules], “The player and his caddie are responsible for knowing the Rules.” This article highlights just a few of the foolish mistakes that can be made by golfers who are ignorant of the Rules pertaining to stroke play.

Player A marked the position of his ball on the putting green and then set it aside while waiting for his turn to play.  When it became his turn to play, Player A failed to replace the ball.  Instead, he putted the ball from where he had set it aside.  After completing play of the hole, this “fool” then played from the next teeing ground.  For these foolish mistakes, the player is disqualified!

Decision 15/4 [Player Lifts Ball, Sets It Aside and Plays It from Where Set Aside] points out that when a ball is lifted under Rule 20-1 [Lifting and Marking], it is out of play.  Thus, when the player played a stroke with his ball while it was out of play, he played a wrong ball.  Pursuant to Rule 15-3b [Wrong Ball: Stroke Play], Player A incurred a penalty of two strokes and was required to correct his mistake prior to playing from the next teeing ground.  Because he failed to do so, Player A is disqualified!

Player B’s ball comes to rest against the flagstick in the hole, but a portion of the ball is above the lip of the hole.  Believing her ball to be holed, she picked it up and proceeded to the next teeing ground where she commenced play of that hole.  For these foolish mistakes, the player is disqualified!

The Definition of “Holed” advises, “A ball is “holed” when it is at rest within the circumference of the hole and all of it is below the level of the lip of the hole.”  Rule 17-4 [Ball Resting Against Flagstick] states, “When a player’s ball rests against the flagstick in the hole and the ball is not holed, the player … may move or remove the flagstick, and if the ball falls into the hole, the player is deemed to have holed out with his last stroke; otherwise, the ball, if moved, must be placed on the lip of the hole, without penalty.”  Since Player B did not hole out, she was in breach of Rule 3-2 [Failure to Hole Out] which, like Rule 15-3b, is a so-called “must correct” Rule.  Rule 3-2 states, “If a competitor fails to hole out at any hole and does not correct his mistake before he makes a stroke on the next teeing ground, or in the case of the last hole of the round, before he leaves the putting green, he is disqualified.”

Decision 20-7c/2 [Ball Putted from Wrong Place Lifted and Putted from Right Place] indicates that, when Player C replaced his ball in front of his ball-marker and putted, he played from a wrong place and incurred a penalty of two strokes per Rule 20-7c [Playing from Wrong Place: Stroke Play].  Rule 20-7c states, in part, “If a competitor makes a stroke from a wrong place, he incurs a penalty of two strokes under the applicable Rule.  He must play out the hole with the ball played from the wrong place without correcting his error, provided he has not committed a serious breach….”  Subsequently, when Player C lifted his ball from where it lay near the hole without marking its position and did not replace it, he incurred a second two-stroke penalty for a breach of Rule 20-1 [Lifting and Marking].