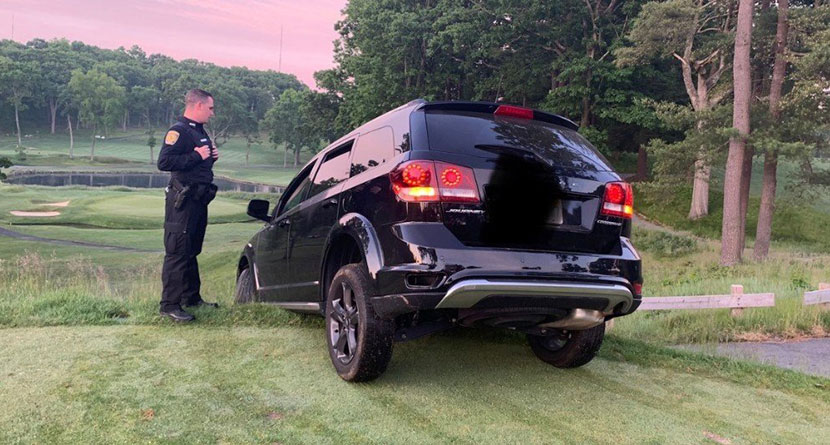 A designated driver following a navigation GPS app turned himself into a hazard on the sixth tee box of Brae Burn Country Club in West Newton, Massachusetts on Tuesday night.

According to police, a man had dropped his friends off around 2 a.m. on June 2 and got lost while using Waze, a traffic app that attempts to find its users the quickest route from point A to point B.

The route the driver selected took him near Brae Burn C.C., up a dirt road towards the course’s maintenance area and actually out onto the course.

“It was pitch-black out when he was driving and took one of the turns too wide and got stuck,” police wrote in their report.

The result was maintenance crews finding out a black SUV teetering off the edge of the 6th tee box around 5 a.m. the next day when they reported for work.

“We tell people: ‘Always use your eyes, your common sense. Don’t rely upon an app on a phone to tell you where to go.’ We’ve all heard stories where an app will take you down a one-way street or lead you down a dirt road that goes nowhere,” Apotheker said. “I think if you saw that you were headed down some sort of road and it looked like it wasn’t going to go anywhere, that you would stop and turn around.”

Police said that the responding officers did not smell any odor of an alcoholic beverage on the driver, did not observe any slurred speech and his eyes were not red. The driver will not face any charges.

The SUV was removed from the course using a tow truck and the maintenance staff reported no damage to the course.