Driverless Golf Carts Could Be The Next Big Thing 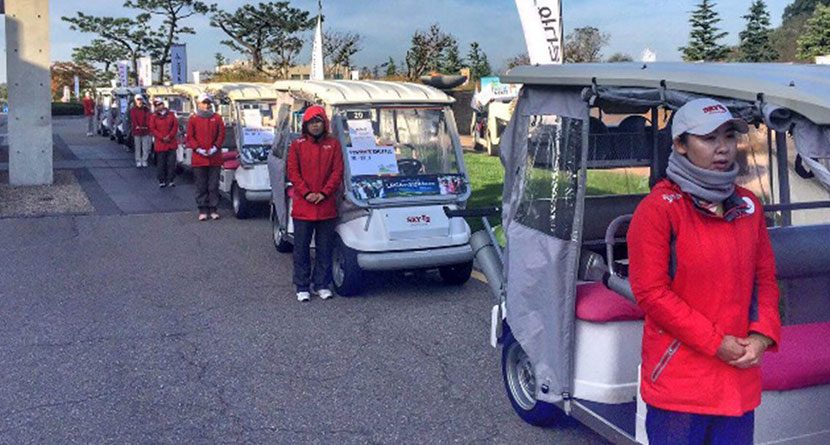 The future of golf is ever changing, from when and how it’s played at places like TopGolf, to how the experience can differentiate itself from competitors, like with GolfBoards. Sky 72 Golf Club in South Korea is introducing their newest perk for traveling golfers: driverless golf carts.

Beth Ann Nichols from Golfweek traveled over to Seoul to check out the carts for herself.

It’s startling at first, watching an empty golf cart move along the path. Automated carts are standard in South Korea and essential for helping Sky72 Golf Club, by all accounts a golf factory, move massive amounts of players from 5:30 a.m. to 10 p.m. daily.

So many things I love about this video. The driverless cart, the night lights and the trees. ⛳️ pic.twitter.com/ZdbQ42hAwd

On pro-am day at the LPGA KEB HanaBank Championship, the local caddies – predominately women – make sure everything stays on track at the Jack Nicklaus-designed Ocean Course. They control the carts, which run along a track, with the push of a button and wear ear pieces to communicate with each other and marshals. The last three holes of the Ocean Course are lighted, allowing for extended play.

There are 300 caddies at Sky 72, and they live together in nearby dorms owned by the club. They’re fed three meals a day at work and receive the equivalent of $120 in cash from each foursome. A bilingual caddie (English, Chinese, Japanese) carries a premium rate of $150.

The fleet of automated carts, 276 between the five public courses (including one executive course under reconstruction) that encompass the club, are numbered and assigned to caddies based on time served. Cart No. 1 goes to the most senior caddie. Each cart carries four players and one caddie.

And this never gets old. Can you send up my 9-iron, please? pic.twitter.com/9aFbPLACnp