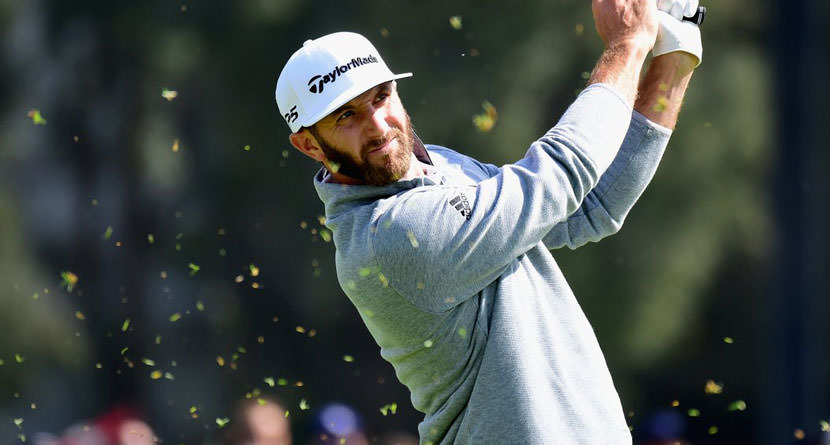 The PGA Tour is in Los Angeles this week for the Genesis Open at Riviera Country Club, while just a few minutes down the road — depending on LA traffic — the NBA All-Star Weekend festivities will be taking place at the Staples Center.

While it wouldn’t be surprising to see some of golf’s biggest names taking in some of the festivities if they’ve earned a late weekend tee time, it may surprise some to hear that PGA Tour players have been invited to take part in the weekend, including one major champion who will.

6-foot-4 Dustin Johnson could have been ballin’ Friday night at the #NBAAllStar, but turned down the offer: https://t.co/d5BGZ8la9N pic.twitter.com/4LvjaWAIE8

Will Gray from GolfChannel.com had more.

At 6-foot-4, 190 pounds, Dustin Johnson is one of the golf’s most athletic players. His ability to dunk a basketball is well-known, which made him a popular candidate to participate in this week’s NBA All-Star Celebrity Game.

The game will be played at Verizon Up Arena at the Los Angeles Convention Center, and Johnson was approached about participating but he declined.

Although the timing didn’t work out for the world No. 1, he had no doubts he could hold his own in the celebrity competition.

“I’d do OK. I beat [former NBA forward] Shane Battier in a three-point contest. That’s my claim to fame in basketball,” he laughed. “It was in Miami at Doral. We did some little exhibition. Granted, it was blowing about 30 [mph] and it was outside, but I still won.”

A hardcore NBA fan and husband of a former WNBA player, Watson is looking forward to putting his game on display.

Watson’s primary responsibility in L.A. will be battling a strong field at the Genesis Open, an event that he won in both 2014 and 2016. But with the NBA All-Star festivities also in town, Watson will make a detour after the second round on Feb. 16 to participate in the NBA All-Star Celebrity Game.

Bubba Watson to play in the NBA Celebrity All-Star game next weekend in LA. His wife’s advice to him: “She told me to stay out the paint. Do not get hurt. I said don’t you worry,”

The game will be tip off at 4 p.m. PT at the Los Angeles Convention Center, about a 17-mile drive from Riviera Country Club.