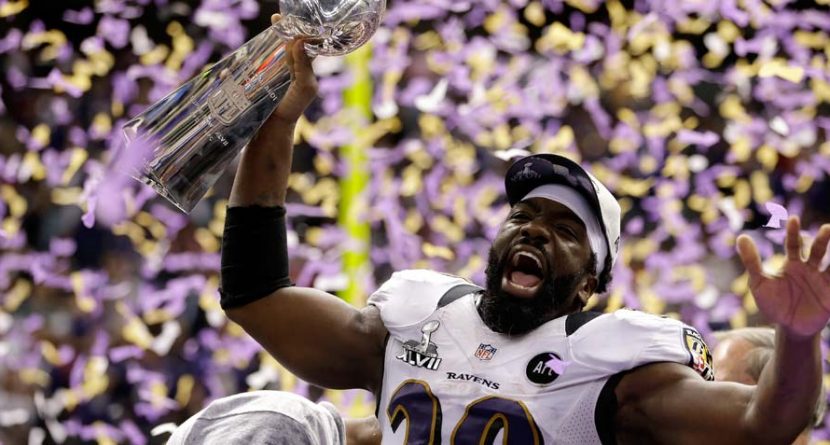 It’s not a revolutionary idea to hold a charity golf event to raise money.

However, when Baltimore Ravens All-Pro safety and now Super Bowl champ Ed Reed decided to host golf events several years back to raise money for his self-titled Ed Reed “Eye of the Hurricane” Foundation, it was more of a difficult decision than expected.

It had nothing to do with his golf game. Ed is an avid golfer and, depending on the length his off-season, keeps his scores in the low 80s.

Rather, it’s that he’s a humble guy and not one to ask of others. Limelight, favors and one-times are not something Ed seeks out, but the prospect of helping others and doing it on a golf course was a no-brainer. For years, his foundation was self-funded — it still very much is — but to link two of Ed’s loves seemed obvious. Golf and helping children. Who could say no?

Standing over a putt, thoughts are plentiful: is the wind going to mess me up, what’s the line, does it break toward the water, is the grain reaching for the sun, should I step back off this?

Then the answers come flying in:  no, the wind is not strong enough, just two inches left of the cup, no break toward water, it’s too late in the day for the blades to be up, you don’t need to step back you are stronger mentally than this… or are you?

It’s an internal battle waged in one’s own brain with every swing, putt and step around the course. It’s why Ed and all of us love the game so much. It’s not us versus the course or an opponent. It’s us versus us. “Golf is life” is what we always say.

The internal struggle has so many parallels to life off the course. If you can silence your demons on the golf course, you can be successful — and the same goes for life. There is no exact science to golf or life, but there are certainly tips, tricks and rules to abide by to help in the journey to success. That, in a nutshell, is why the Ed Reed Foundation uses golf as one of the means to raise money to support the many youth initiatives it funds.

Of the many initiatives the Foundation supports, most help with under-privileged youth. From inner-city charter schools to public middle schools in downtown Baltimore and high schools outside New Orleans, the Ed Reed Foundation wants to help the children in our country. If that mission can be furthered thanks to a fun-filled day of golf, who’s going to argue with that?

The struggle one has during a round of golf is nothing compared to that of the day-to-day life many experience. The golf tournament helps provide Thanksgiving meals to over 500 families can help. Feeding families is just part of where funds are allocated, however. College scholarships are given to children from Ed’s high school (Destrehan), as well as taking underprivileged youth in Baltimore to Ravens home games. Not all is paid for by the two or three charity golf events put on each year, but certainly funds help in a huge way.

The tournaments are held annually outside of New Orleans in June and Baltimore in July. In Ed’s hometown, an old-fashioned BBQ contest breaks out on the golf course. Many sponsors and golfers also cook their favorites like brisket, gumbo, jambalaya, burgers, dogs and, of course, fried catfish.

A recent allocation of funds from the tournament helped to start the football program at the SEED Charter School Baltimore, something Ed and his foundation felt strongly about because of what it does to help make boys into men. Yes, the aggressive nature football is under major scrutiny but there is no doubting the structure, discipline and camaraderie it instills in young men. Life is tough and so is football — a risk for sure but it helps mold young men.

The children of the SEED School sleep on campus during the week and only go home on weekends. They make a commitment to themselves and their education at a sacrifice many can’t understand. Giving them the opportunity to play football is a sense of normalcy that most students have and the children of the SEED School now do. Ed Reed and, in large part. his charity golf events provide that.

A charity golf event or two hosted by a future Hall of Fame football player each year helps raise money, but it also raises awareness of the great off-the-field work that’s being done in the community — and the work that still needs to be done.

We all know the power of sports, its reach, its revenue generating, interest-piquing and star-making abilities, but on a
pair of hot, humid New Orleans and Maryland days during the summer there are no superstars, multi-million-dollar contracts or millions watching on TV, only a bunch of golfers eating, drinking and having fun raising money for the greater good.

Glenn Younes is host of “The Glenn Younes Show” on CBS Radio station 105.7 The Fan in Baltimore and director of the Ed Reed Foundation.