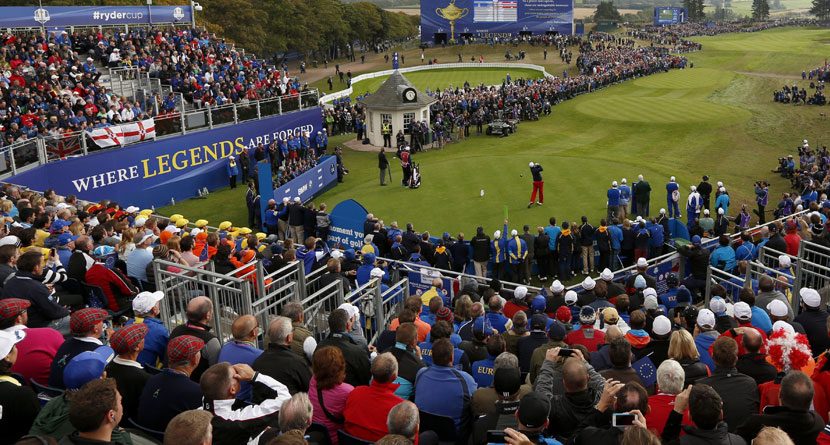 If the atmosphere was good on Friday and Saturday — and it was — it was nothing compared with the show put on by the spectators at Gleneagles for the final day of the 40th Ryder Cup.

The first match between Graeme McDowell and Jordan Spieth didn’t tee off until 11.36 a.m., but soon after 9 a.m. local time, there wasn’t a seat to be had in the huge grandstand surrounding the first tee. Not long after that, the entire fairway and green were encircled.

Clearly, such a huge number of people had to do something to keep themselves amused. And they found many ways to do so. It began with a wave, starting at one end of the grandstand and rippling out to the other side.

But that wasn’t good enough for the fans. They started chanting “Fairway, fairway, fairway!” Eventually, those lining the left side of the first hole got the message. The wave began again, running through the grandstand and all the way down the side of the hole, coming to an end some 50 yards short of the green.

Boos rang out. Then: “Green, green, green, green, green!” Eventually the spectators located behind the first green got the message. And the wave began again, from the edge of the grandstand, all the way round, up the fairway, to the green and beyond. Feeling quite pleased, they gave themselves a cheer.

It was impossible not to get caught up in the moment. At 11 a.m., two hours before he was due to tee off, Thomas Bjorn emerged to get a taste of it. The crowd erupted. And burst into a version of “Bjorn in the USA.”

Alongside the grandstand was the Sky TV booth with Colin Montgomerie, in plain sight of us all. “Monty! Monty! Monty!” they yelled. On and on it went until, finally, he turned and waved to a huge cheer.

Jose Maria Olazabal, one of Paul McGinley’s vice-captains, arrived.  “Olly Olly Olly, oi oi oi!” And then “Olly Olly give us a dance, Olly, give us a dance!” And sure enough, Olazabal obliged with a rerun of his famous dance performed on the 18th green in 1987 after Europe’s first win on American soil.

Now they were in full swing. Miguel Angel Jimenez, Sam Torrance, Des Smyth — even Tom Watson — gave it a go.

We wondered whether the players would enter into the spirit of it all. Most of them did. Graeme McDowell and Bubba Watson were two players who quickly obliged.

Throughout the week, the fans have taken to cheering in time with the players’ practice swings, yelling “fore!” at the end of every single American follow through. Bubba bought into it 100 percent, pointing his driver left and then right as the cry went up. Jim Furyk even placed his hand above his forehead as if trying to keep track of a 400-yard drive.

It lightened the mood, it made everybody smile. And it was exactly what was needed.

Truly, there is no other event like this one.