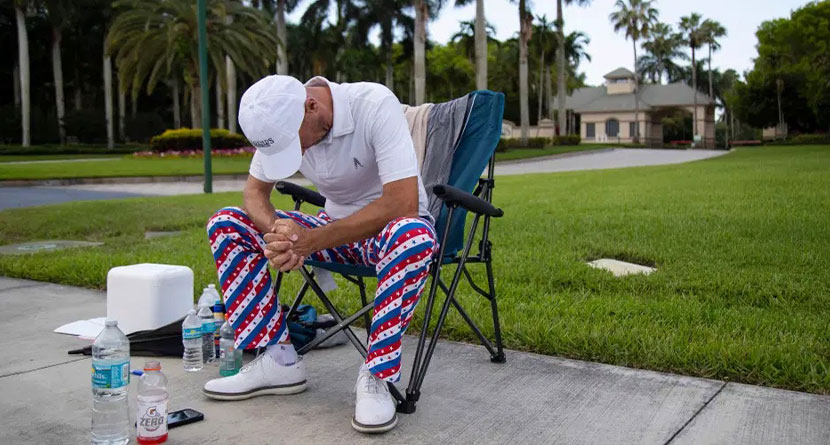 A 42-year-old ex-assistant golf professional at a Florida golf club staged a hunger strike outside the entrance to his former place of work after being fired following more than 14 years of employment.

“I’m trying to get the club to give me a severance,” Brad Stecklein said last week, claiming he was unjustly relieved of his duties as a teaching professional at Legends Golf and Country Club in Fort Myers. “They gave me no reason. I’m fasting to make a statement.”

Inside the club, Legends general manager and chief operating officer Ranae Frazier disputes Stecklein’s claim, but opted not to make a statement to The Fort Myers News-Press saying only, “Nobody is fired without cause.”

According to The News-Press, Florida is an “at will” state, meaning a worker can generally be fired without cause or notice unless termination is for an illegal reason or goes against the terms of an employment contract.

Stecklein set up shop on the sidewalk outside the club entrance and decided not to eat or drink as a form of protest.

Stecklein said there had been a change of leadership in the pro shop at the end of 2020, which has led to some “harsh treatment,” but he had not been reprimanded or written up by the club.

With his family and community members concerned for his well-being, Stecklein called off his hunger strike after losing 20 pounds.

“They didn’t want me to have a heart attack. They said there was a different way to do this,” Stecklein said six days after initially staging his protest. “This isn’t going to end. I have a chance to make a difference.”

A member of the community started a GoFundMe page for Stecklein that has raised more than $5,600 at the time of this writing.

While the money has started to stack up, Stecklein says he hopes he never has to touch it.

Shortly after Stecklein’s firing, Legends master board president Bill Hoffman did send out a letter May 5 to residents. Hoffman said it was club policy not to comment publicly on the discipline or termination of a specific employee.

“However,” Hoffman wrote in the letter, “the club would not terminate an employee without good cause.”

After news of his protest spread, Stecklein said was offered three weeks of severance at an hourly rate but he declined.

“This isn’t about money now,” he said. “How is it acceptable for someone to be fired after 14 years without being written up and no exit interview?”

Instead, Stecklein hopes to make a change in Florida’s at-will status by speaking with Gov. Ron DeSantis.

“I voted for Governor DeSantis,” he said. “I think he did a wonderful job with COVID. It’s tough, but that doesn’t mean things can’t be talked about.”